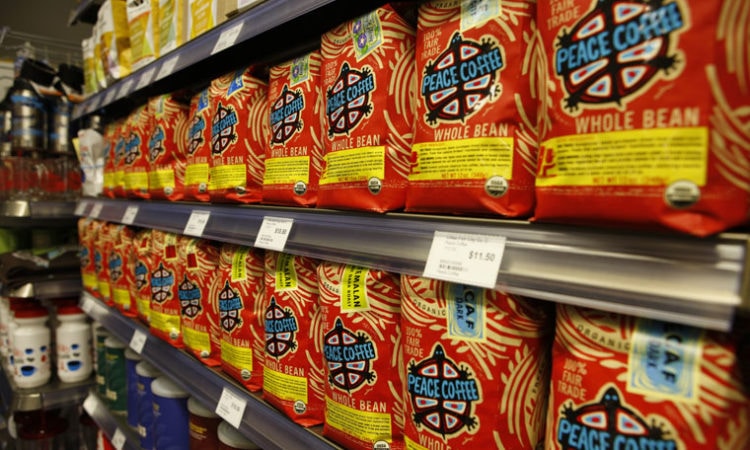 Meant to Bean: How Lee Wallace Brewed Up the Deal to Buy Peace Coffee

The brand’s current CEO Lee Wallace, along with a partner, is purchasing the company from its nonprofit owner, the Institute for Agriculture and Trade Policy (IATP) and Wallace spoke to TCB about the making of the deal.

The IATP launched Peace Coffee in 1996 as a wholesale company that sourced and sold its coffee in accordance with principles of sustainability, fair trade, organic ingredients and local thinking.

In need of an interim leader for Peace in 2006, the IATP hired Wallace, whose work as a consultant reflected those same principles.

“[It was at] a time when other people weren’t really focusing as much as people do now on the idea that you can use business practices to raise money to fund a mission – there’s that intersection between mission and money,” Wallace told TCB. “I was one of the few people in town at the time doing that.”

The hiring was meant to be temporary, but Wallace said she fell in love with the company and the people who worked there. They hired her as a permanent fixture in June of 2017.

According to Wallace, it was the IATP that made the decision to sell Peace Coffee. The reason, she believed, was the coffee company had grown to a size potentially to laborious for the nonprofit to manage.

In 2017 alone, Peace Coffee purchased over 860,000 pounds of organic, fair trade coffee from 25 farmer cooperatives and roasted over 700,000 pounds of coffee. Revenue was between $7 million and $10 million last year, the company said. Meanwhile, its three-year compounded annual growth rate had totaled over 10 percent, with expectations of continued growth in the double digits. Wallace explained that it’s because of Peace’s success that it can now be launched on its own.

“The timing was just right,” she added. “The Institute can also use the proceeds to fund their mission-based work, so it’s a win-win.”

Once the Institute made its sale intentions clear, Wallace said leadership engaged in a series of conversations about what that meant and how they would manage to preserve the mission and culture of Peace.

“I kept asking myself, how do we keep the heart and soul of Peace in Peace? I first thought my role was helping the owner answer that question without me being involved,” said Wallace. “But as time went on I’m like, ‘I love the company, I’m super passionate about it’… I realized I could be that person and help achieve the goal of launching the for-profit company on its own and making sure the mission and culture stayed intact.”

To help herself take on ownership of Peace, however, Wallace knew she needed another investor. Fortuitously, she shared a good mutual friend with Kent Pilakowski, a local entrepreneur. She and Kent had attended social engagements together and worked with people in the same circles.

“The first time I told him about [buying Peace], he was like ‘I’m in, I’m all in, I love this, I would love to be part of a mission-based company,’” Wallace recalled.

Going forward, Wallace said the leadership and staff structure, including herself as CEO, and all existing employees – Peace has 40 full-time staff and 18 part-time – will remain the same. She went into the deal with the intention of making the transition as seamless as possible for all involved.

As for Peace itself, Wallace said they will continue to pursue mission-based growth. She noted that will be mainly through the wholesale business, which involves selling to grocery stores including Kowalski’s, Lunds & Byerlys, Target, Cub Foods, and food co-ops. They’ll also consider adding a “limited number” of coffee shops around the Twin Cities – the company currently operates two shops in the Minneapolis area. Additionally, she said they’ll continue building on its leadership as a sustainable business championing using business as a force for good.

She expects the company to see growth based on its high-quality products, and the fact that interest in specialty, organic, social and health-minded coffee is increasing.

“More people are getting interested in where food comes from, who produced it, is it good for the people and the planet,” Wallace noted.

Some of this environment awareness strategy has been embodied through a fan favorite form of transportation in the Twin Cities: biking. Thirty-six percent of the coffee that Peace Coffee roasted in 2017 was delivered to local businesses via bicycle. In addition to its awareness efforts, Peace co-founded Coop Coffees several years back. The agency allows the company to buy fair trade, organic beans directly from the farmers who grow them.

Wallace also said she hoped to bring the company’s employees to a $15 minimum wage ahead of Minneapolis’ 2024 target, though they’re still working out how to do so.

Wallace was clearly giddy over Peace’s future and added that the transition process had been quite peaceful.

“The folks at the Institute and I have nothing but respect for each other. It’s been a very positive experience for everyone involved,” she said. “It’s been a fantastic experience.”

Wallace noted the deal isn’t yet finalized, but they’re wrapping up. Terms of the transaction were not disclosed.