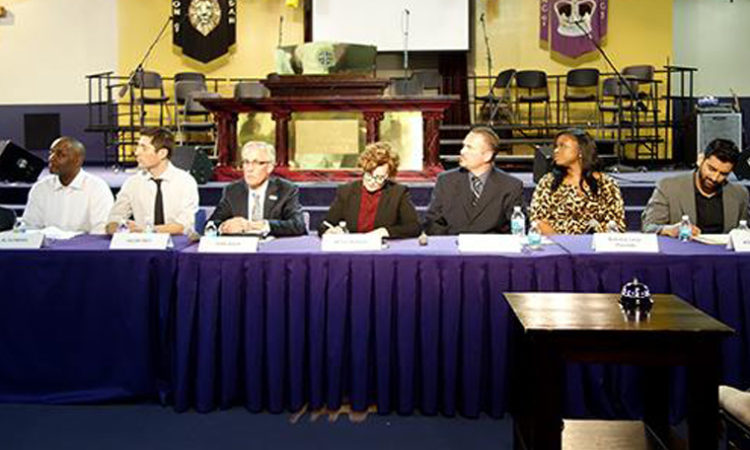 That was the takeaway from Saturday's forum at Shiloh Temple for the nine candidates for Minneapolis mayor.
April 11, 2017

At the same time, they’re skeptical as to whether they will get it.

That was the takeaway from the questions posed Saturday at a forum for the nine (yes, it’s now nine) candidates for mayor at Shiloh Temple. How would candidates reach out to north Minneapolis and include residents in decisions? How would they deal with police brutality? How can the city provide extracurricular activities for young people or promote economic development while preserving the area’s character? How would the candidates address the health disparities or connect with public schools?

In response to those questions (and more), Betsy Hodges, seeking a second term as mayor, described the meetings she held at North High School to decide how a federal Promise Zone designation would respond to crime, economic development and education. Hennepin Theater Trust founder Tom Hoch said he will regularly survey residents with a goal of getting 90 percent to say they feel safe in their neighborhoods and have good relations with the police. (Currently, 90 in Southwest Minneapolis say that, but only 47 of residents on the north side do.)

Levy-Pounds said she would take the issues she’s been working on, north side economic opportunity and police accountability, to the “next level.” “I will guarantee that people who represent the north side will be in City Hall,” Levy-Pounds said. “Not just the outsiders from outside the city getting the good jobs and benefits. North siders deserve some of those jobs as well.”

After Frey gave out his cellphone number, Dehn said he didn’t need to because most people in his legislative district already have it. Instead, he gave his home address, which is just a few blocks from the forum location. “But you can also see me at the basketball game,” he said. “You can also see me at the football game. There are many places you can hold me accountable, because this is where I live.”

The candidates alternately praised the north side of the city while also calling attention to the problems of high crime rates, poverty and a history of neglect for the traditional heart of Minneapolis’ African-American community.

And they attempted to declare their bona fides while questioning the commitment of the others. Hodges mentioned how she was able to fund an equity office and an equity audit in her first budget despite opposition from some on the council, including Frey. Hoch said the city doesn’t have a ward-by-ward “prosperity plan” like one that was completed in Washington, D.C.

Frey repeated his theme that the city needs a mayor who is “visible and present,” something he claims is lacking in Hodges, while Rahman said the city has increases in violent crime and property taxes and blamed Hodges for both. For her part, Levy-Pounds lumped together all three elected officials on the panel — Hodges, Frey and Dehn — for failing to accomplish enough for north Minneapolis. “If you are anything like me, you are sick and tired of being sick and tired,” Levy-Pounds said.

Much of the forum was spent on how to revive the long-struggling economy of the north side and the lack of opportunity for its residents. Levy-Pounds said the city needs to step up its support for small-business creation since businesses owned by people of color tend to hire other people of color. Rahman proposed a program that would provide a city subsidy to any business willing to occupy a storefront that has been empty for six months or more.

Dehn praised the plan to create a black-owned credit union in a neighborhood with way too many check-cashing businesses. And he called on north siders to patronize business in the north side and not taking dollars to the suburbs. But Dehn also cited transit as vital for access to employment and asked help resisting proposed cuts at the statehouse.

Flowers said the city needs to provide money to amplify the impact of last session’s state grants of $70 million for north side development. Frey said as the city uses its resources to attract business investment in north Minneapolis it must require a certain level of hiring from north Minneapolis as well.

And Hodges cited the recent creation of small business navigators to help new business owners, but she also said adequate housing and decreased crime will help improve the economy. “I hear a lot of people who want to invest in north Minneapolis and they want to know that it’s safe,” Hodges said. “So all of our safety strategies and all of our crime strategies are incredibly important to support economic development in the north side.”

The shooting of Jamar Clark by a Minneapolis police officer in November 2015 and the attention it called to historic distrust of police by many north Minneapolis residents is a central theme of the campaign. Levy-Pounds was a leader of the protests at the 4th Precinct and made police reform a primary objective of her term at the NAACP. Flowers has sued the city for what he termed an unwarranted attack by the police. As mayor, Hodges was in charge of the city response to the Clark shooting and the occupation and has been criticized by Levy-Pounds and others for her actions.

“In my time as mayor, I have focused a lot of time with the chief on making sure we are building that police department for the 21st century,” she said.

“It’s taking some time but we have made some progress,” she continued, citing body cameras; de-escalation policies; the new police guild contract (which gives the chief more discretion is assigning officers); the recent community service officer classes that are bringing more people of color into the police officer pipeline; as well as implicit bias and procedural justice training for all officers.

Levy-Pounds was not impressed. “Number one, we need a change in leadership,” she said. “Leadership reflects attitude and the behavior of those on the force.”

And Levy-Pounds said the department needs more than training officers to recognize their implicit biases against certain groups of people; it needs to go after “explicit bias,” she said, “because, to be honest, there are officers who are connected to white supremacist groups.”

Dehn said there needs to be change in police culture where currently too many cops see “everybody as a suspect and everybody as a criminal.” He also noted that while body cameras are “nice,” the city rejected many of the body camera procedures recommendations made by residents.

Rahman said there should be 100 more police in the department, and he would like each one to be a person of color or a woman.