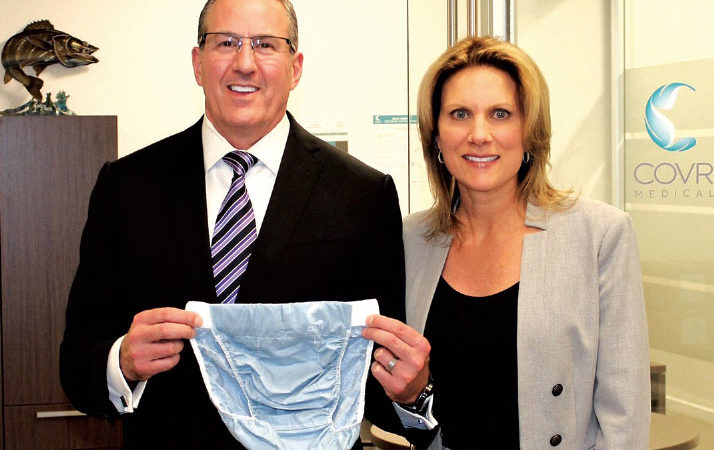 Bruce and Heather Levy with their invention, COVR surgical garments.

The Rochester clinic and its spinoffs are focused on underwear with medical applications.
By Sam Schaust
January 02, 2019

Insecurity is driving a wave of change at the Mayo Clinic, all around an area that’s long been a shared point of awkwardness for doctors and patients: the groin.

COVR Medical, based at the Mayo Clinic Business Accelerator, is testing a line of disposable garments intended to fill an unserved niche in the market. “There is a lot of [intellectual property] around the upper body for the female and yet there was shockingly nothing for the genitals,” says Dr. Bruce Levy, an orthopedic surgeon who developed the concept with his wife, Heather.

Before COVR’s adjustable garments, all surgeons could offer was the infamous blue towel. “The minute the patient moved on the table or you moved the patient during surgery, the blue towel was gone,” recounts Levy. By that standard, there was no practical way to avoid indecent exposure. “Not to mention, the blue towel only took care of patients in the operating room,” notes Heather Levy. “It [wasn’t there] from the moment they were asked to get undressed.”

Success has come quickly: Since the January 2017 launch of COVR’s two designs, which can fit youths to adults weighing over 300 pounds, sales have been rising quarter after quarter, Heather Levy says. The increase is in part due to major signings with two of the biggest hospital distributors, Cardinal Health and Owens & Minor. Currently, COVR is manufacturing 1,500 units per month, selling across the U.S., with each garment’s price determined by the hospital. They buy the undergarments for “a tiny bit more than a triple macchiato with an extra shot of caramel at Starbucks,” he says.

Mayo also is focused on another underniche: “smart underwear.” In the fall, the nonprofit agreed to share its algorithms for heart monitoring with Toronto startup Myant Inc. Its SKIIN underwear will be able to monitor heart rate, activity metrics, skin temperature, sleep quality, and even track medication use. Pending FDA clearance, Myant’s underwear is expected to be released early in 2019.