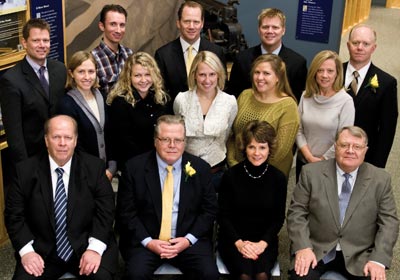 Warroad-based Marvin Windows and Doors received the 2014 American Business Ethics Award (ABEA) last week, given by the Foundation for Financial Service Professionals.
The privately-held family company joins a list of previous winners that include General Mills, Kimberly-Clark, Starbucks and Whirlpool Corporation. The manufacturer of residential and commercial energy-efficient windows and doors became eligible after it became one of two large companies honored at the 15th annual Minnesota Business Ethics Awards in May.
Marvin Windows and Doors, a 2012 Minnesota Family Business Awards recipient, was founded in 1912 and now employs roughly 2,000 people at its national headquarters in Warroad, a town of 1,780 about six miles from the Canadian border.
The company earned the national award in the large company category “for exemplifying high standards of ethical conduct in the workplace, the marketplace and the community.” For the award, now in its 20th year, businesses must provide  comprehensive information about their ethics plans and examples of how they’ve put that plan into action.
“It is an honor to receive this award and be recognized on a national level for our commitment to doing the right thing for our employees, communities and customers,” Marvin Companies CEO and Chairman John Marvin said in a statement.