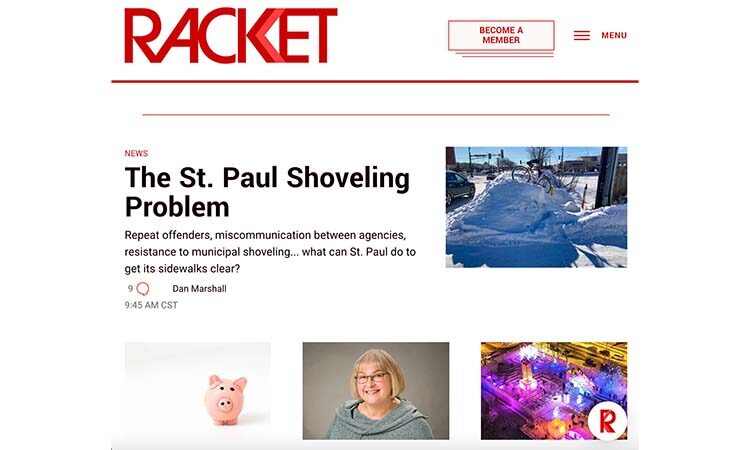 Racket launched in mid-2021 from the remains of the shuttered City Pages.

Four journos carry the mantle of the alternative press in the Twin Cities.
By Adam Platt
January 09, 2023

A few days ago Common Roots Café in Minneapolis shut down, suspiciously soon after being notified it was the subject of a union organizing effort. The 15 year-old business was struggling and owner Danny Schwartzman issued a lengthy email to customers describing his decision.

I was interested because I cover the hospitality industry and a colleague pointed me to a long article in Racket parsing the question of why unions are trying to organize small, “community minded,” bars, restaurants, breweries, and coffee shops—with limited success. It was prototypical alternative press—strong point of view (you could say “one-sided”), thorough, written with some wit and style.

Racket is an online publication that rose out of the ashes of City Pages, shuttered by its owner, the Star Tribune, in 2020. It has four staff, who edit, write, and produce all the content (City Pages had 12 at the end). It employs a subscriber-pay business model and last summer published an interesting letter of disclosure to subscribers, laying out everything about its operations, from most popular articles to subscriber data and revenue.

The “alternative press” is today a squishy vertical, rendered almost irrelevant by Twitter, Substack, and myriad online pubs, all employing trappings of alternative journalism, which has its roots in 1960s and ‘70s weeklies like The Village Voice (or locally City Pages and the Twin Cities Reader, where I got my start). They were a reaction to a divisive era and a news media that had become establishment, formulaic, and bland.

Alt weeklies at their peak were powerful economic engines with strong margins and a lot of pages. The legendary Chicago Reader (one of the few alts which still exist) was frequently published in four sections and the thickness of a Sunday newspaper. The genre’s revenue mix was entertainment ads for a readership in its 20s and 30s, lots of classifieds, and “personals,” basically classified ads for people looking to find a date or one-night stand. Craigslist and dating apps destroyed the business model, and the journalism—though occasionally consequential, frequently smart-ass, and usually entertaining—didn’t float the boat.

I was once privy to market research the Star Tribune did on the local alternatives and learned that readers picked them up for many reasons, but the movie times far outstripped public affairs as a motivator. That City Pages ended up owned by the Strib was an irony that had little currency to its millennial audience when the paper bought it in 2015.

Outgoing Strib publisher Mike Klingensmith told me in 2018 that CP had certain capabilities the Strib wanted, and merged the staff of its in-house alt weekly, Vita.mn, into CP’s team. (Vita existed for the Strib to repurpose newspaper content to an audience which did not read the paper.)

“[The newspaper] did nothing to salvage [City Pages],” says Racketeer Jay Boller, who was once part of Vita.

When the paper told CP staff in late 2020 it was shutting the publication, in the headwinds of the pandemic, “I sent an email asking if anyone is interested in trying to continue on our own,” recalls Em Cassel. Her three Racket partners are the ones who replied. (Jessica Armbruster and Keith Harris are the two I haven’t mentioned. They have ties to the legacy City Pages, dating as far back as the late ‘90s.)

But first, “we took an eight month break and collected unemployment,” says Boller.

Racket was born in mid-2021. Harris covers music and film, Boller is nominally the news side, Cassel and Armbruster write about food and A&E events, respectively, though these verticals are not rigid and there are many shared bylines. Today Racket has roughly 3,000 paid subscribers, plus 7,000 additional readers registered to its website, and 8,000 newsletter subscribers. It puts out two daily and two weekly newsletters, which drive much of its web traffic.

“We were sure ad-supported [a la City Pages] was not the model for us,” says Harris, even though Racket is attracting some advertising and the partners say it will be a growing component of the revenue mix. And “the nonprofit model was saturated [with Minnpost, Sahan Journal, and Minnesota Reformer],” Harris adds.

In its first year Racket had $177,000 in revenue and paid a bit more than half of that to its partners, none of whom are getting rich off the deal, if that wasn’t self-evident. Its top 10 articles list was capped by a ranking of grocery store rotisserie chickens closely followed by a piece about restaurateur Kim Bartmann’s nomination for a James Beard Award despite having recently settled with the state Attorney General over allegations of wage theft (no wrongdoing was admitted).

None of the four have a hard-news background and Racket’s content mix reflects it. The articles are more likely to be buzzy than explosive, but when something grabs their interest, like a collection of MPR employees questioning the network’s direction, or Common Roots’ closure, Racket does serious-minded work. Cassel says the content that gets clicks is not necessarily what generates subscribers.

Racket’s look and business model is based on Defector, which rose from the ashes of Deadspin and the awful Gawker. Thankfully it’s not as smug.

Boller says every mortgage payment and rent check got made during the startup year, yet “it’s an uphill fight.” But early indications are that Racket is viable and the team even thinks about how they’d deploy capital if there was growth (freelance wages in the short-term, a business manager or staff reporter long-term).

And though they never saw themselves as publishing moguls, “I love owning my own business,” says Cassel. “Stressful as it is.”