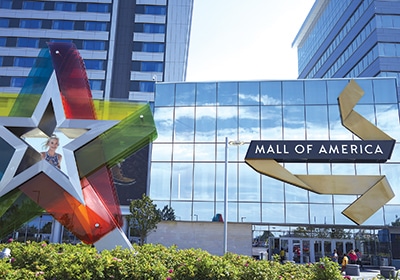 As the holiday season approaches, shoppers might finally be tempted to check out the Mall of America’s new north entrance. The addition opened with a J.W. Marriott hotel last year and little else. Supercomputer company Cray will soon fill office space included in the buildout. But the retail? Mostly unfilled.

That’s finally changing. Just as consumers begin the ritual of racking up big credit card balances, the mall is welcoming three apparel retailers: fast-fashion giant Zara; boho-chic Anthropologie; and TOMS, which gives a pair of shoes to a child in need when it sells a pair.

“For guests who haven’t visited Mall of America recently, when they step inside, they will find a brand-new mall,” says Dan Jasper, MOA’s spokesperson, noting the new stores and updates.

Mall officials are likely sighing with relief at the arrival of the high-profile brands as it has bigger expansion plans across Lindau Lane by the new north entrance. Aimed at high-income households, it will offer luxury stores, “museum-quality” exhibit spaces, a waterpark, spa and wellness center, nightlife options and hotel. The mall submitted plans to Bloomington officials last fall, but has been mum on it since.

That’s likely because it was scrambling to find retailers for the previous expansion, and are nowhere close to moving ahead with it, says Allison Kaplan, senior editor of shopping and style at MplsStPaul Magazine.

“Initially, MOA had hoped the [north entrance addition] would attract luxury brands like Gucci,” Kaplan says. “When those deals didn’t come to fruition, I think the announcement of [further expansion] was intended to show [those retailers] that Mall of America is serious about luxury and willing to create an environment that will draw top brands.”

Mall communications staff declined to talk about the addition, which they had suggested would break ground earlier this year. Construction might begin next year, according to Schane Rudlang, administrator of Bloomington’s Port Authority: “We continue to work with MOA on subsequent phases of the project and expect another larger phase to be under construction in 2017.”