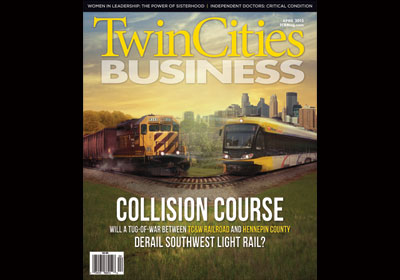 LRT Limps Along, Roads/Transit Strike Out

It was a galvanizing legislative session for social issues like same-sex marriage. But infrastructure was left well short of the altar in the 2013 session, the first of two under full DFL control since 1990. Of particular note were failures to pass taxes to create ongoing funding sources for Twin Cities transit and state roads, thought to be a slam-dunk at the beginning of the year.

“This legislature had a lot on its plate,” says Hennepin County Commissioner Peter McLaughlin, generally considered the godfather of rail transit in the Twin Cities. He says he’s still assessing which of many stumbling blocks brought down the infrastructure agenda.

Possible culprits include Chamber of Commerce indifference, despite tacit support; a lack of a key advocate at the Legislature; metro and outstate interests at odds; polling data showing unpopularity of a gas tax hike (gas prices rose 60 cents in the final week of the session anyway); and a failure to develop a consensus on road funding until the session was nearly over.

“We need more outside advocates stepping up,” says House Transportation Finance Chairman Frank Hornstein (DFL-Minneapolis), and “it wasn’t a high-enough priority to any single leader. Plus a lot of objections surfaced within [the DFL] caucus that we didn’t quite expect.” He points to 2014 as an “infrastructure and bonding” session. It is also an election year.

What little funding did emerge will allow another year of planning for Southwest light rail (see April ‘13 TCB)—though the line still needs an $81 million state commitment to qualify for federal funding—and some local option tax and bonding authority to deal with ever worsening state roads. “But it’s a drop in the bucket,” says Hornstein, “relative to the need.”