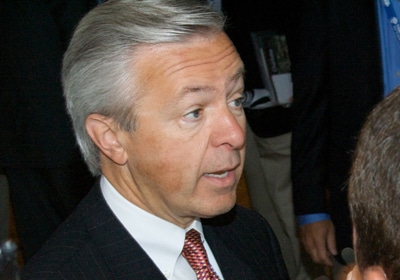 Aaron Epstein purchased a $4,500 ad in the Star Tribune in hopes of inciting a call for resignation of John Stumpf from Target’s board of directors.
By TCB Staff
October 16, 2016

UPDATE: John Stumpf resigned from the Target board of directors on October 18, according SEC documents.

Aaron Epstein, a Target shareholder since 1967, is asking other shareholders to join him in a request to remove Wells Fargo CEO John Stumpf from Target’s board of directors in wake of the bank’s recent account scandal.

“I go to the Target shareholders meeting that is held every June,” Epstein told TCB, “but I really want action on this now.”

In a call to local Target shareholders, Epstein took out a quarter page ad in the Thursday edition of the Star Tribune. The ad, which he said cost $4,500, reads:

Epstein, 86, previously ran the Pickwick bookstore chain in California with his father Louis before their business was acquired by Dayton’s, the department store chain from Minneapolis that eventually created Target.

This is not the first time Epstein has called for Stumpf’s removal.

“About six years ago, Target changed their shareholder transfer agent to Wells Fargo and I did raise an issue over the fact that Mr. Stumpf was on the board of directors,” he said. “I felt that might’ve been a conflict of interest. If you’re on the board, your own business should be completely independent of what Target is doing.”

Meanwhile, Epstein has yet to hear back from shareholders that share his point of view. Nevertheless, he remains optimistic of his effort.

“With physical ads like this, you don’t really receive a storm of immediate personal contact,” he said, “but it puts the idea in people’s heads who then act amongst themselves. I’ll see in the next few days how this plays out.”