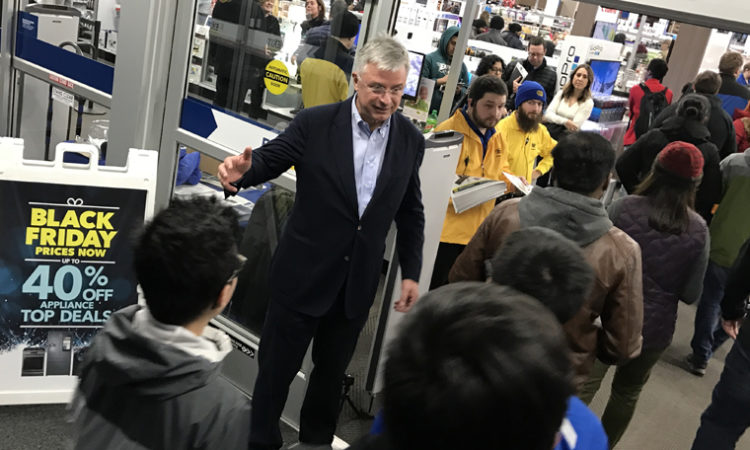 Best Buy CEO Hubert Joly welcomed in customers during Black Friday this year at a Best Buy in Minnetonka. ( Photo by Best Buy)

The electronics company's same-store sales jumped 9 percent during the holiday period, an incredible feat for any retailer in today's retail climate.
By Sam Schaust
March 01, 2018

With an extra week of sales in its fourth quarter, Best Buy blew past its prior year performance. Same-store sales—a crucial retail statistic measuring year-over-year growth among stores older than a year or more—grew by 9 percent, the Richfield-based electronics retailer said Thursday, marking its best holiday performance in more than a decade.

Its net income totaled $364 million, or $1.23 per share, during the quarter—a drop from the $607 million, or $1.91 per share, it posted last year. Best Buy CFO Corie Barry, during a conference call with investors on Thursday, equated the decrease to tax rate changes and other one-time events. Otherwise, she said, the company’s adjusted earnings per share came out to $2.42 during the quarter, amounting to a 25 percent uptick over the $1.93 in adjusted earnings per share reported last year.

Meanwhile, analysts polled by Zacks Investment Research predicted Best Buy’s fourth quarter would’ve rounded out to about $14.6 billion in sales and earnings of $2.05 a share.

“Product availability was much better this year and was a factor in driving our strong growth,” Best Buy CEO Hubert Joly told investors Thursday morning. “Last year, we had both product recalls and product availability constraints across multiple vendors and categories… We deliberately invested in having more product in stock [this year].”

Come May 31, Best Buy will be shutting down all 257 of its mobile stand-alone stores in the U.S. The company’s mini-shop initiative, which focused exclusively on its mobile phone business, was kicked off more than a decade ago before the iPhone was on the market. “Fast forward to 2018,” Joly said, “and the mobile phone business has matured, margins have compressed and the cost of operations in our stand-alone stores is higher than in our big-box stores.”

All in all, mobile stores came to represent just more than one percent of Best Buy’s total sales, according to Joly.

Joly did not elaborate on how many jobs would be affected by the closings. He did, however, say the company would “work hard to retain the maximum number of these employees.”

Also coming this year will be a new paid service geared toward Best Buy’s technology assistance department Geek Squad. Sometime this spring, the company will be launching its 24/7 online, in-store and over the phone service called Total Tech Support. In a gist, the service ties into Best Buy’s In-Home Advisor program, which has Geek Squad members going to a person’s home to install electronic systems or troubleshoot any related issues.

“We provide support for all of the customers’ technology, no matter where and when they bought it,” Joly said of the company’s new $199-per-year Total Tech Support service. “We believe that customer support needs are often not limited to a specific product. The need is now to have all of their technology work together.”

In its 2019 fiscal year (which will fall back to a 52-week format), Best Buy expects sales to fall between $41 billion and $42 billion, or roughly flat year-over-year. Same-store sales could grow as much as 2 percent in that year, Best Buy said, with adjusted earnings growth of 9 to 13 percent.

Best Buy shares finished Thursday at $75.30, a four percent increase over its prior day’s close.