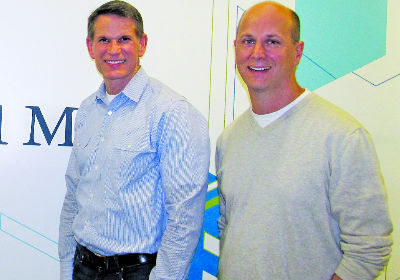 Chris Heim and Dan Mayleben, who specialize in acquiring and growing software firms, plan to expand their latest purchase, Axium, organically and through acquisitions.
January 20, 2013

Financial terms of the deal were not disclosed, but unnamed “people familiar with the transaction” valued it at more than $20 million, according to a report in The Oregonian.

Heim told Twin Cities Business on Thursday that Axium’s former owners, Alan and Kathy Mills, sold the “vast majority” of their stake in the company to Heim, Mayleben, 2ndWave, and a group of Axium executives, but declined to disclose exact percentages.

Alan and Kathy Mills, who previously served as CEO and president, respectively, have retired from the company.

Axium, which employs about 90, will retain its name and continue to be based out of Portland, although Heim and Mayleben will remain in the Twin Cities. Heim said Axium will likely open a “small office” here. The company was recognized by The Oregonian as one of Oregon’s 60 “top workplaces” in 2012.

Heim and Mayleben founded 2nd Wave Software in 2007 to acquire, run, and increase the value of software firms. Heim said that he and Mayleben plan to grow Axium organically by developing new products, as well as through acquisitions. They plan to hire about 15 people in the next year at Axium’s current offices in Portland, Indianapolis, and New York, and at its new office in Minnesota, although it is “too early” to say how many will be hired in Minnesota, Heim said. He also declined to disclose Axium’s 2012 revenue, but said that it represented “double-digit percentage” growth from its 2011 revenue of $12 million.

Through their buyout firm, Heim and Mayleben in 2007 purchased Eden Prairie-based communications software company Amcom Software, which was sold to Virginia-based USA Mobility in 2011. To learn about how they grew that company, read Twin Cities Business’ September 2011 story here. Prior to launching 2ndWave, the two held leadership positions at Eden Prairie-based HighJump Software, which was sold to 3M in 2003.

Heim was recently included in Twin Cities Business’ Black Book listings of “100 people to help you thrive in 2013.” To learn why Heim is considered an influential serial entrepreneur, read his profile in the December 2012 issue here.