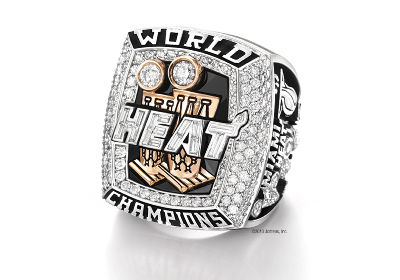 The Minneapolis-based company—which manufactures class and professional sports rings, graduation apparel, yearbooks, and other memorabilia—has produced rings for all three of the Miami Heat’s NBA Championship victories (in 2006, 2012, and 2013).

Although a Jostens spokesperson declined to disclose the cost of the company’s championship rings, the 14-karat yellow-gold rings recently presented to the Miami Heat are described as each weighing 135 grams and include 242 round-cut diamonds, 1.5 carats of custom baguette-cut diamonds, and three black onyx stones totaling 10.3 carats. Additionally, 187 diamonds circle the top of the ring. The company designed and produced the rings at facilities in Minneapolis; Denton, Texas; and Montreal, Canada.

The Jostens spokesperson declined to comment on the size of the company’s championship rings business but said that the company is “experiencing continuous annual growth of our championship business,” which includes the professional sports market as well as the college and high school markets.

Jostens employs 2,564—770 of whom are based in Minneapolis, Eagan, and Owatonna. The company is a subsidiary of Visant Corporation, an Armonk, New York-based marketing and publishing services company that serves the education, fragrance and cosmetics, and educational and trade publishing industries. Visant reported $1.2 billion in revenue for the fiscal year that ended December 29—a 5.4 percent decrease from the prior year.