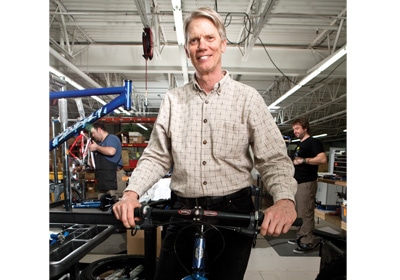 While there is a strong bike industry in Minnesota (including frame builders and parts manufacturers), few companies actually produce complete bikes locally.

But Quality Bicycle Products (QBP), a bike parts supplier, plans to ramp up its business by locally producing and internationally distributing complete bikes from its assembly facility in Bloomington, according to Minnesota Public Radio (MPR).

Approximately 95 percent of bikes in the world are produced in Taiwan or China, MPR said, pointing out that maintaining a manufacturing facility in Minnesota while shipping globally has its risks—primarily production costs.

However, QBP Founder and President Steve Flagg told MPR that producing bikes is not that far of a leap from the company's current operations. QBP already distributes parts to more than 5,000 independent bike dealers and serves customers under multiple brands, including Lazer Sport, Flybikes, and Stolen Bike Company, among others.

“We’re already building 70,000 wheels in Minnesota, doing bike assembly,” Flagg told MPR. “It’s not out of reach for us.”

Flagg told the news outlet that QBP can obtain from local sources many of the raw materials needed to build bikes in Minnesota, but the company will likely use some parts that are manufactured in Asia.

“We’ll source out tubing, and then we’ll cut, miter, weld, and then do assembly at our existing facility,” Flagg told the radio program. “We do a lot of it already.”

Flagg has plans to build a nearby facility to accomodate the welding and painting of bikes. Once that site has been developed, Flagg reportedly hopes to start producing complete bikes within two years.

QBP, which also operates distribution centers in Ogden, Utah, and Middletown, Pennsylvania, was recently named by Outside magazine as one of the “Best Places to Work” in the United States.