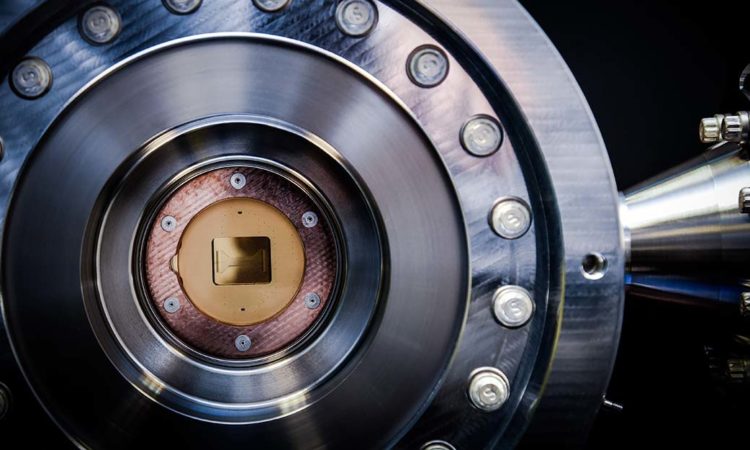 Closeup shot of an “ion trap” inside a Quantinuum supercomputer Quantinuum

Minnesota was once a major center of computer technology, with companies like IBM, Control Data, and Cray leading the global development of supercomputers. Thanks to a new company launched on Tuesday, the state may be poised to help power the development of a new wave of digital innovation.

The technology is quantum computing, which promises to create machines whose calculating speed will far outstrip current “classical” supercomputers. The company is Quantinuum, the product of a merger between UK-based Cambridge Quantum Computing and a business with a famous Minnesota pedigree: Honeywell Quantum Solutions. While Quantinuum has its headquarters in Colorado and Britain, about 40 of its roughly 400 employees are based in Honeywell locations in Golden Valley and Plymouth.

Before the launch of Quantinuum, Honeywell had been focused on building quantum hardware, while Cambridge Quantum has been developing applications. Much of Quantinuum’s hardware will continue to be designed and built by scientists in the Twin Cities metro.

Though it has had products in development, Quantinuum is entering a race with plenty of high-powered competitors, including IBM, Google, and Intel. What’s more, quantum computing has yet to make much impact in the marketplace. But investors see plenty of enterprise potential in quantum computing’s nonbinary “qubits,” which possess calculating power millions of times faster than that of traditional binary (0 and 1) coding.

Quantinuum says it will launch a quantum-based cybersecurity application this month. Its plans for 2022 include release of enterprise software that will apply quantum computing to complex problems in pharmaceuticals and materials science. In addition, it will be developing upgrades for its System Model H1 quantum computing hardware.

Also in the new company’s agenda: Uttley told Forbes that Quantinuum expects to go public within the next year. It wouldn’t be the first young company in the quantum space to do so: Maryland-based IonQ joined the New York Stock Exchange via a SPAC in October.

Thanks primarily to IBM’s Rochester operations (which have shrunk somewhat in the past decade), Minnesota remains in the supercomputer game. But the state’s reputation as a center of tech innovation has long been dwarfed by the Coasts. Though not headquartered here, Quantinuum could position Minnesota to make a quantum leap into the next big thing.