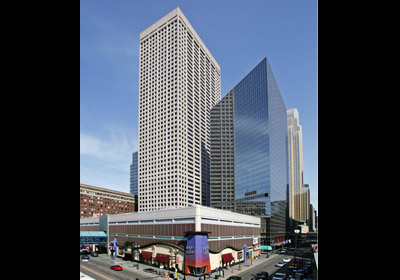 Len Druskin renewed its lease at City Center in downtown Minneapolis, where it will renovate its existing space and consolidate other stores under the “Len” brand.
April 18, 2014

Fashion retailer Len Druskin, Inc., said in January that it would shutter some of its downtown Minneapolis stores, consolidating them into a single outpost in the city’s core.

And while the move left some empty storefronts in its wake, it appears Len Druskin is committed to remaining in downtown Minneapolis for a considerable period: It recently signed a seven-year lease at City Center.

Twin Cities Business profiled Len Druskin in a 2013 feature story, chronicling the company's evolution from a single Edina boutique to a network of more than 10 locations.

In late January, President Michael Druskin revealed in a lengthy blog post that the company planned to move toward “one unified brand,” simply called “Len.” That process involved closing the LD Len Druskin and LD Blues concepts in RBC Plaza, as well as the nearby Len Druskin Man store. Prior to that, the company had closed its Len Druskin Outlet store in City Center.

Michael Druskin said at the time that the company would introduce a new concept by mid-2015, which will include designer brands alongside “value fashion products.” “Being part of the Central Business and Retail District Downtown is a priority in our restructuring plans,” Druskin wrote.

The company stayed true to that promise. On Monday, real estate company Shorenstein Properties, LLC announced that Len Druskin “solidified its commitment to downtown Minneapolis by signing a seven-year renewal of its existing lease at Minneapolis City Center.”

The company will remain in its existing 7,196-square-foot store, which will be Len’s only downtown location. The company “plans to renovate the City Center store beginning in late summer with a planned fall reopening” under the new Len brand, according to Shorenstein Properties.

“This is an important commitment by an iconic and much-loved local brand to maintain a flagship location downtown and in doing so contribute toward a more vibrant business and retail community within the city of Minneapolis,” Liz McLay, a retail consultant to Shorenstein Properties, said in a statement.

Despite its downtown consolidation, Len Druskin has actually been growing elsewhere. It added a new Mall of America store near the end of February and operates stores at the Galleria and Southdale in Edina, Rosedale in Roseville, and Ridgedale in Minnetonka, and it opened its first Illinois location last year. (The Ridgedale store recently relocated within the mall.)

Read more about the demise of downtown Minneapolis retail, and what it might take to restore retail in the city’s core, in this 2011 Twin Cities Business feature story.