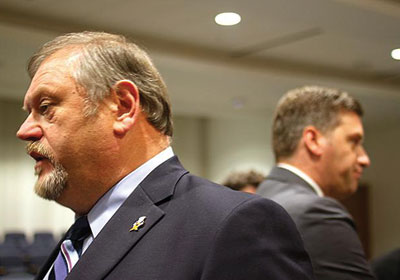 Taking shots at the other side's math is a long-held tradition in St. Paul. Yet the difference in the numbers being bandied about on taxes, transportation and bonding hint at a formidable problem for lawmakers.
April 29, 2016

It’s that point in the Minnesota legislative session when the debate has come down to a very unglamorous subject: math.

Republicans, who control the state House, recently offered up a budget plan that essentially leaves state spending flat, reserving a projected $900 million surplus this year open to spend on tax cuts and transportation. DFL Gov. Mark Dayton and the Democrats who control the state Senate want to spend much of that money on things like education and racial equity.

Republicans have criticized Democrats’ ability to do “simple math,” saying Minnesotans expect government to take care of its most basic functions first. Likewise, Democrats criticized Republicans for their budget math, which does not yet include the price of their tax cuts. Democrats expect the Republicans’ proposed tax cuts to cost far more than $900 million surplus available.

As committees work through the budget numbers, taking a swipe at the other side’s math is a wonky —  if boring — tradition in St. Paul. Yet the underlying numbers illustrate a serious issue going forward: at the halfway point of a historically short 10-week session, Minnesota lawmakers are still miles apart on just about every key issue in front of the Legislature this year. To name a few:

There are other factors that complicate getting any deals done. Technically, it’s not a budgeting year in Minnesota, so nothing has to be done with the surplus money right now, which takes some pressure off legislators to reach agreement. What’s more, all 201 legislative seats are on the ballot in the fall, turning the Capitol into a sort of pre-election staging ground where campaign themes are born. Both sides are already suggesting the other party wants a “do-nothing” session in order to use it as a campaign issue this fall.

“I’d like to see a successful session. Minnesotans expect that, they have a right to it,” Dayton, who is not up for re-election, told reporters Monday. “But it’s very difficult when you have a divided government and people with very different ideas and ideologies.”

*Part of the $40 million proposed for broadband by the House GOP is spent during the 2018-19 budgeting cycle.

Taxes ‘linked’ to other issues
The fear of a “do-nothing session” isn’t unfounded after what happened last year. Back then, Republicans wanted to pass more than $2 billion in tax cuts; Democrats wanted to increase gas taxes to pay for road and bridge projects for the next decade. When the two sides couldn’t find agreement on either, those issues were pushed aside in order to pass a budget without going into a government shutdown.

Those issues are back on the table again, basically back where they left off last year. And many still see transportation, taxes and now a third issue — bonding — as inextricably tied together. For example, Republicans want to include significant money for road and bridge infrastructure in their bonding bill, while Democrats include a tax increase in their transportation bill.

“There won’t be a bonding bill if there’s not a tax bill and a transportation bill,” said Rep. Greg Davids, R-Preston, chair of the House Taxes Committee. “I’ve been saying that for months and months. People say, ‘Oh are you linking them?’ I said, ‘Yeah, they’re linked.’”

Even if the proposals are linked, Davids said he’s optimistic. He named his tax bill after the Journey song, “Don’t Stop Believin’,” — a sentiment Davids says he still holds about the legislation. “I think my tax bill was aptly named back in 2015, even though I had no clue it would be going this long,” he said. “I believe we can get something done.”

But part of the problem goes back to, yes, the math. On taxes, Dayton has proposed a $117 million package with a credit for child care and education expenses, Senate Democrats want a $300 million proposal with property tax relief and credits for veterans; Davids is still waiting on a final tax budget target from House leadership. The House bill passed last year was worth more than $2 billion in tax cuts, but that was spread out over two years, and projections for tax collections have changed since then. Davids is hoping for a final bill somewhere in the $400-$600 million range.

“They continue to talk about all the things they are going to do in the tax area, [well] show me the money,” Bakk said. “Because it just isn’t there.”

Tough math on bonding bill
In his spare time, Bakk has also been doing another kind of math: Vote counting. He closely watched the House’s vote earlier this session to extend unemployment benefits to miners on the Iron Range, an industry that’s in the midst of a severe downturn. In all, 17 Republicans voted against granting the unemployment benefits extensions.

To Bakk, that means those are going to be tough votes to get for things like spending bills and the bonding bill. “That tells me they’re not willing to spend on anything,” he said. “Nothing.”

By Bakk’s calculations, that could be a particular problem for the bonding bill, which requires a three-fifths majority to pass. That means the parties in control of each chamber need help from the opposing side to pass a bill. If there’s more than a dozen Republicans who won’t vote for a bonding bill, Bakk said, it means Daudt has to get even more votes from House Democrats.

Transportation stuck in the middle
And still bouncing between the bonding, budget and tax debate is transportation. Republicans are still rejecting the idea of a gas tax increase and promoting the transportation budget bill they passed last year, which proposes spending $7 billion over 10 years through bonding and a transfer of $300 million in sales taxes on auto parts and repairs into road and bridge accounts.

After Senate Democrats released their budget plan, Daudt criticized them for not including more spending in their budget targets for transportation. “With a $900 million surplus, I cannot believe Democrats are spending almost nothing on roads and bridges,” he said.

But House Republicans have yet to redo their math on the transportation bill to figure out how much it will cost in the new year. House Ways and Means Chairman Jim Knoblach, R-St. Cloud, said he’s waiting on word from leadership to hear what their total target will be this session.

“Now we are at the point where the proverbial rubber meets the road, I guess that’s a good metaphor for transportation, right?” Knoblach said. “I think there’s a lot of discussion going on early. I don’t think anyone wants to get down to the last days like we did last year. I certainly don’t want to.”

But with the state’s revised budget forecast in February, which cut the projected surplus from $1.2 billion down to $900 million, Bakk said he’s worried about the state’s fiscal integrity in years to come. He doesn’t want to commit to much money in “the tails,” a legislative term for future budgets. So instead of linking the taxes and transportation bill, Bakk wants Republican House Speaker Kurt Daudt to pick which one he wants more.

“He is going to have to figure out which bill he wants, the transportation bill or the tax bill,” Bakk said. “Because there’s not enough money for both.”