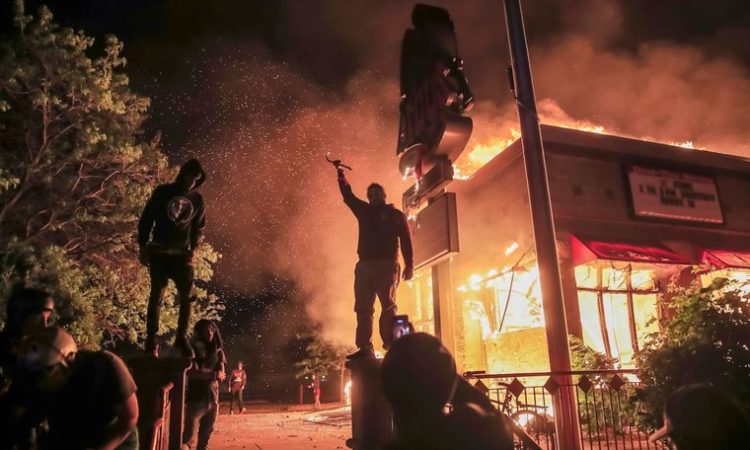 Photo By Tannen Maury via Shutterstock

A night of anarchy left local business and citizenry looking for leadership, which was in short supply.
By Adam Platt
May 29, 2020

It all blends together working on three hours sleep, but I believe it was MSNBC’s Ali Velshi, courageously broadcasting from Lake and Minnehaha, who noted to the nation the lack of law enforcement presence as Minneapolis and St. Paul sank into anarchy last night. The Governor was invisible. Mayor Carter went on KARE-11 and delivered a filibuster on black rage while declining to outline a strategy for protecting his city. Mayor Frey emerged at 1a, holding an evasive and emotional press conference that also lacked the air of authority.

It was a night where some other harsh truths were perhaps driven home. About the failure of the Minneapolis DFL establishment to confront or even rein in a rogue police over four decades, two generations. Was it a lack of will, a lack of authority, or something else? We were compared unfavorably with Mississippi as a place for people of color and by now even those of us deeply steeped in Minnesota exceptionalism have to accept the essential truth of this.

The denial of the gravity of the police killing of George Floyd was most apparent in Hennepin County Attorney Mike Freeman’s halting, somewhat confused Thursday afternoon press conference; the resolute insistence on following regular procedure, waiting for toxicology and other aspects of an investigation that would take weeks. Former federal prosecutor and legal scholar Maya Wiley accused him on MSNBC of failing to understand his role in maintaining social order. Freeman’s press conference had the damning tone-deafness of the noblesse oblige the old line DFL has offered Minnesotans of color for decades.

And what of the businesses, the dozens, hundreds of businesses that were vandalized, ransacked, looted. Seemingly every business along Lake Street and University Aves. Target saw what was coming better than public officials, closing most of its metro area stores, which inexplicably became a focus of the violence even beyond Lake Street and the Midway, despite the company’s superior reputation as a diverse employer of choice.

Yes, Target will be fine, but so many of the small businesses will not. The major targets were perhaps predictable, liquor stores, pawn shops, jewelry shops, but the vandalism was more widespread. The businesses that most closely served these communities were the victims of their rage.

We all have neighbors who dug out hunting rifles or long-stored handguns. Police were not responding to 911 calls. Mayor Frey said the city was prioritizing lives over buildings, but there was the distinct sense that the city and its businesses had been left to the mob.

When pressed by reporters, neither Carter nor Frey had reassuring answers about who was in charge and what was the plan. Was there a decision to not engage the rioters? Was there too few law enforcement officers to do the job? After weeks of docile and compliant pandemic journalism, there was no denying what reporters were seeing and even mild-mannered anchors began calling out the lack of clear leadership and sense of chaos in the city.

At dawn the MFD was still an hour from moving into the Lake Street hotspot but the State Patrol and National Guard had. At a 10a Governor Walz reemerged to try to set a sense of control. He quoted a call from state Rep. Patricia Torres Rey informing him that her district was burning, that law enforcement was absent. That communities of color felt just as threatened as predominantly white neighborhoods. Walz appears to no longer be content to let the buck stop at the mayors’ desks.

It was implied, if not stated, that last night was as it appeared to be—the cities and state were caught flat-footed, a day behind the curve in prosecuting the Floyd case and mobilizing protection for the cities. (Shortly after noon today, public safety commissioner John Harrington said ex-Officer Derek Chauvin, pictured in the video seen around the world with his knee on George Floyd’s neck, was in custody pending charges. Process took a back seat. Hopefully it is an omen for the coming days.)

Tonight is another night. There’s a distinct sense that the beleaguered small businesses in Minneapolis and St. Paul cannot endure another like the last two. Their owners and employees are our friends and neighbors. They are already suffering in a pandemic economy. Does city and state leadership have better answers for them, and for the citizens looking for tangible evidence of a more urgent and decisive response to the lawlessness shown by the police and an inflamed citizenry?

And will our leaders be visible? Will they communicate with more clarity? Will they lead?