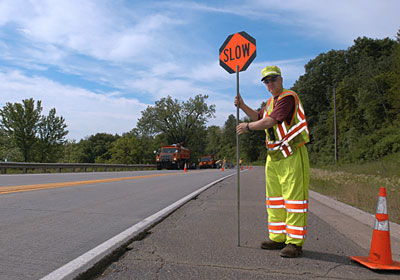 The ballot question would ask voters if tax money currently collected on the sale of auto repairs and replacement parts should be dedicated to roads and bridges.
February 05, 2016

Last year, after a legislative session in which no progress was made on how to fund Minnesota's transportation needs, one state lawmaker quietly introduced an idea: Let the voters decide.

In June, Sen. Scott Dibble, the DFL chair of the Senate Transportation Finance Committee, proposed a ballot question that asked voters if they wanted to take sales taxes already collected on auto repairs and replacement parts and dedicate the funds to highway construction and upkeep.

Hoping a compromise would break gridlock on the issue, Dibble took part of the idea from Republicans in control of the House, with whom he had clashed all session over a package to fund transportation needs for the next decade. His proposal also included a modified gas-tax increase, which Democrats had been pushing.

Though the bill never came to a vote at last year’s special session of the Legislature, as Dibble had wanted, the ballot initiative idea has survived. As lawmakers head into the 2016 session, transportation funding is once again on the table, and Gov. Mark Dayton and top legislative leaders all say they’re open to Dibble’s idea of putting the question to voters next fall.

“We are talking about not getting into the biennial political food fight in the general fund for transportation services,” said Dibble, DFL-Minneapolis. “You need long-term planning to get the these projects going and cover major equipment and investment costs. If your funding streams are volatile, transportation will always come up short.”

An answer to gridlock?
The type of amendment Dibble has proposed is not unprecedented in Minnesota. The state’s road and bridge fund was actually established via a constitutional amendment back in 1912, when voters authorized the state to collect taxes every year to construct and repair roads and bridges. As recently as 2006, Minnesota voters approved a constitutional amendment (with 57 percent of the vote) to require that all taxes collected on the sale of vehicles go specifically toward transportation spending.

That amendment, phased in over five years, directed about $300 million in new money each year into transportation. It specifically allocated 40 percent of the money for mass transit, with the rest going for roads and bridges.

Last year, Senate Democrats and DFL Gov. Mark Dayton pushed for a 16-cent increase in the state’s gas tax and a sales tax increase in the metro to pay for road, bridge and transit projects across the state for the next decade. But Republicans balked at the idea of raising the state’s gas tax, and instead proposed raising $7 billion over 10 years for roads and bridges through the surplus, bonding and by diverting the auto part and repair taxes into highway funds. Unable to reach an agreement, lawmakers tabled the discussion until 2016.

In the interim, the gap hasn’t closed much between the two sides. In December, during the November budget forecast presentation, Dayton admitted that he thought his gas tax increase proposal was “dead” under the Republican controlled House. But Dibble and Senate Democrats still plan to push for that proposal during the 2016 session.

“I know the Republicans really want to get a transportation bill and they don’t want to raise the gas tax,” said DFL Senate Majority Leader Tom Bakk. “The Senate position is we’ve already taken a vote on the gas tax and we have it in conference committee and we are going to fight for it. It’s dedicated funding.”

But Republican House Speaker Kurt Daudt said Republicans are just as sour on the idea of raising the gas tax as they were last session. “They want to raise a new tax, the highest gas tax increase in the history of the state, to pay for a core function of government?” said Daudt. “To me that doesn’t make a bit of sense. It’s a tough uphill argument for Democrats. I’m a problem solver, so I want to solve the problem, but politically, I love that they keep doubling-down on this loser issue.”

All sides open to the idea, with caveats
One thing all sides seem to agree on: Minnesota’s transportation system needs more funding. That’s why the argument keeps popping back up.

Democrats criticized Republican’s plan last year — diverting the sales tax on auto parts and repairs to fix roads and bridges via the general fund — because that cash could get tampered with by a future Legislature.

“I’m open to putting it on the ballot,” Daudt said. “One of the criticism of our plan by Democrats has been, ‘Well, this isn’t really dedicated. It could be taken away.’ I don’t really believe a future Legislature would take it away. I think we can put in place that funding mechanism in statute and I believe it would stay there, but if that brings Democrats on board to our plan, I’m absolutely open to talking about. I believe the public would support it.”

Dayton is open to the idea of the amendment as well, but he’s worried it won’t generate enough money to solve the problem. If approved, the proposed amendment would dedicate about $300 million per year to transportation projects, and Dayton's administration has identified more than $6 billion in transportation funding needs over the next decade.

“I've proposed a constitutional amendment. I think there should be a constitutional amendment. I think some of those general fund revenues, sales tax, could be used justifiably for transportation,” Dayton said in early December, in response to the November budget forecast. “But that's permanently removing those revenues from the general fund. So, first of all it's going to deplete the general fund for years ahead. And secondly, it's not going to be close to what the needs are.”

Bakk is particularly concerned about diverting general fund dollars into a constitutionally dedicated pot of money. The state is projecting a $1.2 billion budget surplus next session, but with inflation included on the cost of running government, Bakk said there’s not much wiggle room projected down the road. If the money stays in the general fund, it could be spent on anything. During the 2006 amendment debate, groups like Education Minnesota opposed the ballot initiative, arguing it could divert money from schools and other programs.

“I think it’s a little unfair to use general fund money for transportation,” Bakk said. “It should be a user-funded system. That’s not a general fund purpose. If the public wanted to do it — put something on the ballot — we can explore that idea and we can explore the gas tax, but I’ve never been a fan of putting tax provisions in the constitution. I think legislators should have the courage to take a vote on this themselves.”

Putting an amendment on the ballot doesn’t require the signature of the governor, only a majority vote in both the House and Senate. There’s already one ballot initiative slated for next fall, asking voters if they want to take the power of legislator pay raises out of lawmakers’ hands and leave it up to an independent commission.

But Bakk, who was around for the 2006 amendment, is concerned that an opposition movement could form and quash a transportation funding initiative. “I'm worried a ‘vote no’ campaign would surface and it would fail,” Bakk said. “I’m getting too gray to keep starting this conversation over with a new Legislature each year.”