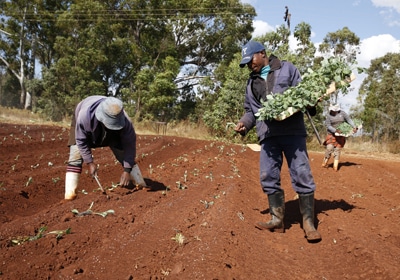 The Arden Hills agribusiness is looking to expand its African operations, an area that Land O’Lakes CEO calls “everyone’s great growth market” in the future.
By TCB Staff
November 06, 2015

Although terms of the deal were not disclosed, Arden Hills-based Land O’Lakes will assume 52.5 percent ownership of Villa. According to the company release, Villa’s management team will maintain control of the business, while Land O’Lakes’ crop inputs business Winfield Solutions will offer assistance to Villa’s already existing operations.

“We’ve been in countries across the world, including parts of Africa, for 35 years through our international development efforts,” said Land O’Lakes CEO Chris Policinski in a statement. Polincinski said the food company plans to introduce “research and development efforts that will provide new products to local growers that help produce more food, more sustainably.”

Kim Olson, chief communications officer for Land O’Lakes, said that the company is still identifying what products would fit best in the South African market. However, she added that the company would explore growth in plant nutrition, biological products, seed treatment products, inoculants, public health and other areas that would create new jobs.

“According to the World Bank, almost 97.6 hectares were used for agricultural production in 2014 in South Africa, nearly 80 percent of the land in the country,” said Olson. “It’s true that the local farmers and producers in Africa have had challenges sustainably producing enough food to feed their communities. Our expertise in areas such as drought-resistant seeds coupled with the expertise of the Villa team will ensure that knowledge and resources reaches more farmers and producers.”

Agriculture was an $8.7 billion industry in South Africa for 2014. The South African agribusiness has been fueled by Villa’s efforts to train the country’s civilians at the its Villa Academy Training Institute. While there, potential farmers work with agriculturalists, producers and sales people to help optimize crop production using fewer resources. With the help of Land O’Lakes, Villa plans to expand the institute’s range of training courses both locally and in the rest of Africa.

“The data is clear: Agriculture and production are critically important to South Africa,” said Andre Schreuder, managing director of Villa Crop Production, in a statement. “We are positive that this deal will enhance our capabilities, build on distinctive and complementary product offerings and bring new technologies…to help meet local growers’ needs today and into the future.”

Land O’Lakes’ Olson said the deal was influenced its 34-year-old international development operations, a division of the company which has trained farmers and developed food markets in 80 nations (primarily in Asia and Africa) since 1981. The training programs held by Land O’Lakes across the world were funded primarily by the United States Agency for International Development (USAID) and the USDA so that small farming operations can foster innovation and strengthen the private sector.

Land O’Lakes CEO Policinski has previously stated that “Africa will be everyone’s great growth market” in the future. The deal for Villa, according to Olson, “is the next logical step” for Land O’Lakes moving forward.

Land O’Lakes currently employees almost 10,000 employees and posted 2014 sales exceeding $15 billion. Its products can be found in all 50 states and in more than 60 countries.