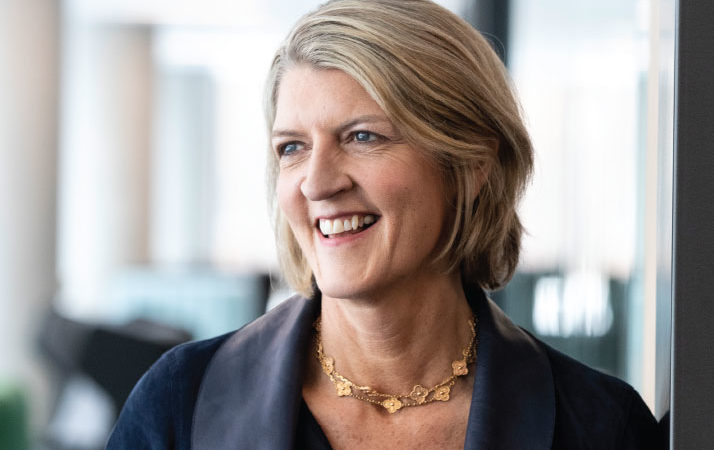 During the coronavirus pandemic, the demand for Land O’Lakes butter and other dairy products is spiking at U.S. supermarkets.

That’s putting extra stress on Land O’Lakes employees charged with providing the food that Americans want as they hunker down at home to avoid virus transmission.

Land O’Lakes CEO Beth Ford says her cooperative wanted to acknowledge the sacrifices its workers are making. “Across our plants and distribution centers, for all of our businesses, we’ve given pay increases to recognize their efforts at this challenging time,” Ford says.

In a Tuesday interview with Twin Cities Business, Ford discussed how she’s backing her workers, challenges within the food distribution system, advice she’s given Minnesota Gov. Tim Walz, and how she’s working with corporate executives across the nation to address the coronavirus.

Land O’Lakes, based in Arden Hills, generated about $14 billion in net sales in 2019, and the cooperative is owned by farmers and agriculture retailers.

It’s within that co-op culture that Ford says she has been taking steps to ensure that employees have what they need during an “unprecedented” time in the nation’s history.

“Where you learn a lot is if you listen to your employees,” Ford says. “What are their concerns? Then you try to mitigate those concerns. That, I think, is the most important thing for us.”

While listening, child care concerns came to the fore quickly. “What we found with our team members is that many of them were struggling, like all of us, with child care issues, especially if you have young children,” Ford says.

“That immediate stop to school means that some of them have to work on what are they going to do for child care,” she says. “So we offer some paid-time-off for them to deal with those things.”

Land O’Lakes operates plants across its three business units—dairy foods, animal nutrition, and crop inputs. The products are deemed “essential” by federal and state governments, because they are sustaining people and animals and will be used by farmers for the coming planting season.

The decision to increase pay for Land O’Lakes front-line workers “is really more of a recognition for the work that they are doing,” Ford says. She declined to provide a dollar figure for the pay raises or specify how long they’ll last. “We’ve said, ‘OK, right now for this period of time we’re going to [have pay raises]’,” Ford explains. But the end date is unclear. She noted that the Trump administration announced this week that social distancing guidelines will be in effect “at least through the end of April.”

To ensure that employees are operating in safe environments, Ford says managers have altered how they deploy workers in plants. Before the coronavirus threat, she says, staff often worked across multiple zones in a Land O’Lakes facility. “What we are doing now is breaking them into smaller teams, so that they don’t have large groupings,” she says. “We are making sure that there is a tremendous increase in our cleaning regimens.”

Since mid-March, about 250,000 Minnesotans have filed for unemployment benefits. At Land O’Lakes, Ford says, “I don’t foresee a reduction in force.” In contrast, Ford adds, “Actually, we are out looking for employees at many of our plants and distribution centers.”

One of the biggest challenges Ford says she faces is the “level of volatility” in the economy. “There is such a tremendous shift,” she says. In the dairy products business, she says, it’s true that “retail is really up” in sales. But on the food service side of Land O’Lakes business, she notes that dine-in restaurants and schools are closed. “That business has just dropped dramatically,” she says. Ford and her leadership team are adapting to changes in demand for the co-op’s mix of products.

When Ford originally joined Land O’Lakes in 2012, she came with extensive experience in supply chain management. Consequently, she’s been analyzing distribution channels for products during the current crisis.

“From a food company perspective, our processing facilities and our distribution is working well and is quite strong,” she says. Distribution challenges are surfacing at the retail level. “Retailers put

in their distribution centers and then they push [them] into their stores. But with consumer behavior being different, that’s why sometimes consumers may go to stores and they find some things are out of stock.”

Even when retailers understand what the new demand is for certain products, she notes that many retailers lack storage space for current purchasing patterns. “At the store level, you see consumers buying for two weeks at a time,” she says. “There is a surge in buying because all of us don’t know how long this stay-at-home order is going to last.” In addition, she says, people are buying significantly more food because their children aren’t getting any meals at school.

Well-functioning supply chains is one of the issues that Ford is working on through the Business Roundtable, an organization of American CEOs that advocates for public policies that support a strong economy.

Ford serves on the Business Roundtable’s board of directors along with high-profile CEOs that include Mary Barra of General Motors, Tim Cook of Apple, and Jamie Dimon of JPMorgan Chase.

On March 26, the Business Roundtable outlined its supply chain and distribution concerns in a letter to the National Governors Association.

“What we need is some standardization and coordination among the federal, state and local officials about essential workers,” Ford says.

In the letter to the governors, the Business Roundtable CEOs said the “lack of clarity” and consistency about what constitutes critical and essential services makes it difficult to know when employees can travel to work locations. “Fear of running afoul of state and local restrictions has a chilling effect on companies carrying out these essential operations,” the letter said.

As a general rule, most states have viewed “food and agriculture” as an essential service, which covers Land O’Lakes operations. Yet Ford adds her concerns extend beyond the ability to deliver food and farm products to customers.

Federal standards, which provide clear and consistent guidance to state and local officials, also would “ensure that critical health supplies get where they need to go, and that patients and hospitals are supplied,” Ford says. She’s calling on governors to adopt a baseline “essential services” definition, which she says, “will make the supply chains more efficient.”

Ford is among the Minnesota-based chief executives who’ve been called on for advice by Gov. Tim Walz. “He was looking for input on what are the essential services, what are the things that really drive the value chain,” she says, adding that the governor understood the importance of “efficient movement of goods in the state.”

She took part in a conference call with Walz that involved food company leaders. “We discussed different priorities, one of them being child care for workers, and how do we make sure that the employees stay safe,” she says.

“I think the governor is doing a very good job at being science-based, focused on what the math is, and the analytics,” Ford says. “He’s being very deliberative. It’s been terrific to partner with him, not just the food companies, but all of the companies here in Minnesota.”

On Wednesday, Gov. Walz is scheduled to conduct a conference call with hospital leaders from rural Minnesota. Ford says she’s worried that rural America is dealing with disadvantages during the Covid-19 crisis, including health care access.

Ford, who spoke to the Economic Club of Minnesota in February about underinvestment in rural communities, says she’s also concerned about children’s educations in agriculture regions. “They are trying to do telelearning” following school closures, but Ford says many rural residents lack broadband service.

Ford emphasizes that farmers have been hurt by low crop prices in recent years. But the Covid-19 threat won’t prevent them from working outside. “We are seeing goods move,” she says. “Farmers are preparing their fields. We can see that from our fertilizer business.”

For Americans, she says, the “strength of the food supply is terrific.” But beyond her responsibility to run a financially-sound business, Ford says she will keep asking: “How do we support the farmers, the rural communities, and the members?”