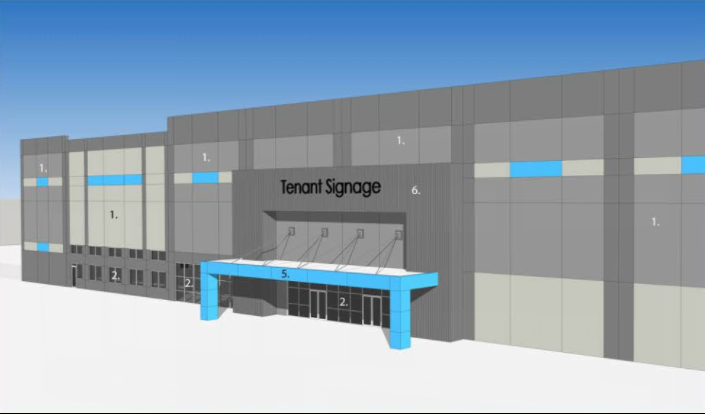 Rudimentary rendering of the front of the Lakeville facility Scannell Properties

Rudimentary rendering of the front of the Lakeville facility Scannell Properties

It may be hard to believe, but just a few years ago Seattle-based e-commerce giant Amazon.com had zero physical presence in Minnesota. No warehouses, no distribution centers, nothing.

“It’s a huge opportunity for jobs, good jobs. Amazon’s compensation package is strong. I don’t think they pay anybody less than 15 bucks an hour,” said Lakeville Mayor Doug Anderson. “We’re excited about the jobs and we’re also excited about the tax base for our community.”

Anderson noted that the expansive building will be “five football fields long.” The city approved a variance for the project to allow the building to be 50 feet tall, much higher than typical industrial buildings.

Anderson said that the city isn’t kicking in any subsidies for the project.

“We know that they were looking at other locations around the Twin Cities,” said Anderson.

Indianapolis-based Scannell Properties will develop and build the Amazon facility. A spokeswoman for Scannell declined comment, referring questions to Amazon.

The online behemoth has steadily expanded locally and now has eight different facilities across the metro:

With the company’s 2017 acquisition of Whole Foods Market, it added 7 metro brick-and-mortar grocery stores to its Twin Cities portfolio.

In 2018, Amazon spent about $15 million to upgrade and overhaul a 383,000-square-foot building in Brooklyn Park, which had been home to a paper warehouse, for a sorting center.

According to the company’s web site, it now has more than 4,500 full- and part-time employees in Minnesota.

“Amazon leverages its scale for good and makes investments to support communities. We are excited to join the Lakeville community and to bring hundreds of full-time jobs to the area,” said Kirsten Wenker, a spokeswoman for Amazon. “Amazon provides a great place to work with highly competitive pay and benefits from day one, and training programs for in-demand jobs.”

As the Covid-19 pandemic has driven an increase in people shopping online from home, it’s been a boon to the industrial property market as e-commerce companies need more and more space to store and distribute merchandise.

“That’s I guess a prime example of e-commerce growth in our market and across the country,” said John Ryden, a senior vice president and veteran industrial broker with the local office of CBRE Group Inc., of Amazon’s plans in Lakeville.

“They’re kind of always out there looking at different sites with different requirements. Some of them go away and others kind of pop up under the radar like that one,” said Ryden of the Lakeville project.

Back in February, Amazon announced its first-ever fulfillment center in Iowa in the city of Bondurant in the Des Moines area. The 645,000-square-foot facility is slated to open late this year.