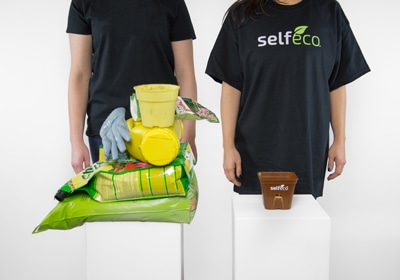 SelfEco latest product idea was born out of a startling statistic: An estimated 200 million pounds of plastic garden pots end up in landfills each year. So why not reduce that amount by creating the first-ever compostable, self-feeding garden pot?

Brothers Allen and Danny Mishek started Stillwater-based SelfEco in 2015 as a sister company to VistaTek, a custom-injection molding company they purchased from their parents five years ago. SelfEco opened with a product line of compostable cutlery and dinnerware products, which drew high praise and demand from its buyers.

“We saw not a lot of people were entering into that marketing space,” said Danny. “With plastic being the cheaper build, I think people weren’t familiar with the materials and this version of the plant-based product.”

In the same year, SelfEco decided to expand into home and garden goods. With the product’s straightforward title, the SelfEco Pot builds plant food into the walls of the pot, which, according to the company’s findings, produces bigger and healthier plants.

Not only is it more Earth-friendly, SelfEco founders and brothers Allen and Danny Mishek believe its pot could potentially cut gardening costs altogether. Compared to the traditional need for fertilizers, plant food, a petroleum pot and other materials, Danny said the SelfEco pot “would be about 60 to 70 percent the cost of a stable pot and fertilizer.” (Danny noted this was just one example of a price comparison he performed).

To give its pot a large volume run, SelfEco took to Kickstarter to raise funds. The company put up a $25,000 goal in hopes to purchase a production mold that would improve its capabilities and ultimately shave the retail price of a SelfEco pot by as much as 85 percent. “For right now, we developed a prototype tool just to get products tested,” Danny said.

Within 30 hours of the campaign’s launch, the SelfEco pot reached its $25,000 benchmark and has moved to surpass $28,000 with nearly three weeks to go.

Danny recalls being ecstatic by the immediate support. “There is a movement among the younger generation that knows there are products that are not being put on the shelves,” he said, “simply because big box retailers decided they don’t want it.”

Interest in SelfEco’s product has moved beyond the casual consumer, though. While refusing to disclose specific names, Danny revealed a number of home and garden companies have contacted him to make early orders.

As SelfEco’s fundraising efforts continue, Danny admits the company is readying a new set of Earth-friendly products. “We have a variety of products around this garden line,” he said, “but we won’t release those until we get through the Kickstarter and see how successful that campaign has been.”

SelfEco's Kickstarter, which began on January 11, will continue its fundraising campaign until February 10.