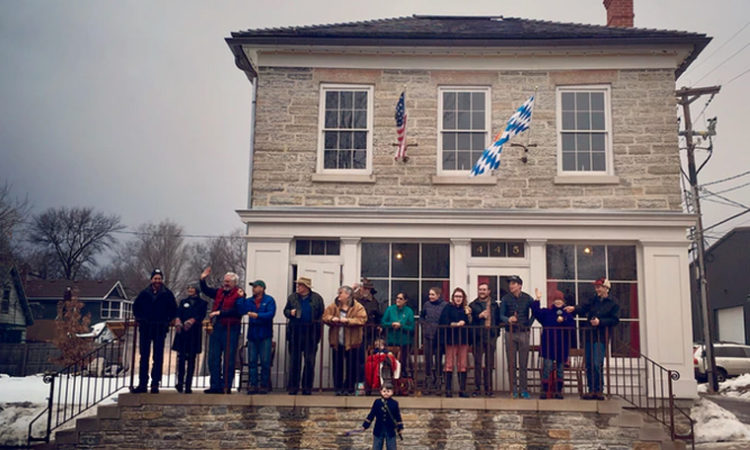 A local lawyer is looking for financial assistance in restoring an almost-demolished limestone saloon from the 1850s.
April 17, 2017

After spending several years renovating a commercial building in St. Paul — originally built in 1857, making it the oldest structure of its kind in the Twin Cities — owner Tom Schroeder is on the homestretch of the reclamation project.

By September, Schroeder expects to hit his long-sought goal and return the building to its first intended use: as a German beer saloon.

“In order to do this right, we need to pay attention to the details all the way through to completion,” Schroeder said in an interview with TCB. “The historic nature of the building, its position on solid bedrock and its construction of solid bedrock makes this inherently much more expensive than any other build-out.”

Which is why Schroeder, who is a lawyer by day at Minneapolis firm Faegre Baker Daniels, is turning to Kickstarter to fund the remaining detail-oriented work.

“I’ll cover the new fire suppression system, the new water and sewer line if people help me on the real character enhancing elements of this project,” he said. “That means restoring the original woodwork, staying true to the details of the doors and paneling and the way the bar is constructed.”

The future saloon, which Schroeder is calling Waldmann Brewery & Wurstery, kicked off a crowdfunding campaign on Sunday with the goal of raising at least $45,000 in about a month.

If the project hits its goal, Waldmann will open in its intended capacity with historic furnishings like steamboat chairs and tables made from reclaimed virgin white pine dating back to the 1880s. According to Schroder, up to 60 people at a time will be able grab a beer, most of which will be German-style lagers (two core, year-round beers; one seasonal beer; and two “extended seasonal” beers).

While Waldmann is meant to reflect America’s past, Schroeder insisted it would not explicitly act as a “time machine.”

“You’re not going to feel weird walking in there with a bunch of people in period costume fake talking to you from the 19th century,” he said. “There will be people sitting around with their iPhones, there will be high-speed Wi-Fi, but there will be no flat-screen TVs.”

While Waldmann is old, it’s not the oldest saloon of its type in the country. New York City-based McSorely’s has remained in continuous operation since 1854 with a two-beer menu and equally simple food selection. “In many ways, it’s been the spiritual model of what we’re doing,” Schroeder said. “I find it refreshing in this day and age when we’re always deluged with options.”

Waldmann will be open to the public on the evening of April 20 as part of a crowdfunding launch party. Though the space is unfinished, Schroeder hopes visitors will see the building’s historic charm and learn to treasure his pre-Prohibition era saloon for generations to come.