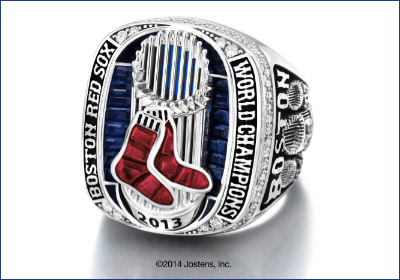 In addition, championship-series MVP David Ortiz was presented with a one-of-a-kind ring to commemorate the achievement—the first such ring given to an MVP.

Jostens did not disclose the price of the new rings awarded to the Boston Red Sox, which are described as featuring 14-karat white gold with 126 diamonds, 16 custom-cut sapphires, and nine custom-cut rubies, which are shaped into Boston’s red stockings logo. In all, the jewels add up to nearly eight carats. Ortiz’s MVP ring is also 14-karat white gold with the same ruby stockings, but with personalized inscriptions such as his stats for the final series.

Fans can purchase replica rings online, with the “Ultimate Fan Ring” retailing for $5,899.

In November, Twin Cities Business reported on Jostens’ plan to acquire Austin, Texas-based American Achievement Group Holding Corporation, which also produces commemorative products such as yearbooks, as well as championship products including the 2009 New York Yankees World Series rings under the brand Balfour. That deal is expected to be finalized during the second quarter of 2014 and is valued at $486 million, according to a statement filed with the U.S. Securities and Exchange Commission.

Founded in 1897, Jostens is a subsidiary of Visant, an Armonk, New York-based marketing and publishing services company that serves the education, fragrance and cosmetics, and educational and trade publishing industries. Visant reported $1.1 billion in revenue for the year ended December 28. Class rings and jewelry products constituted $187.3 million, or 17 percent of that revenue. As of November, Jostens had 2, 564 employees—including 770 in Minneapolis, Eagan, and Owatonna.