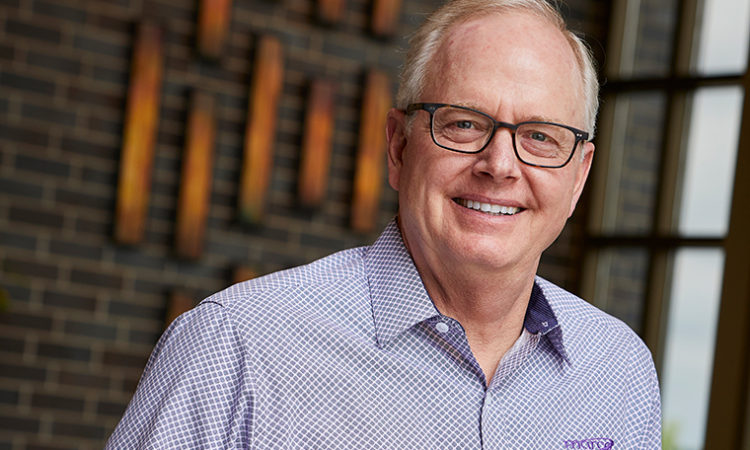 He got his start with the IT company selling office furniture in the 1980s.
By Dan Niepow
March 04, 2021

Jeff Gau this month will retire from his position as CEO of St. Cloud-based IT services company Marco.

Gau, who started his 37-year career with Marco selling office furniture in the 1980s, will step down from his role as CEO role on March 31. After that, he’ll serve as chairman of the company’s board, though he says he won’t be involved in the company’s day-to-day operations.

Doug Albregts, who joined Marco in 2019, will take the reins as the company’s next CEO. Albregts most recently served as CEO of Sharp Electronics Corp., the U.S.-based subsidiary of Japanese electronics giant Sharp. Gau has known Albregts for a decade; Sharp Electronics once counted Marco among its customer base.

Gau, 62, said the company’s succession plan has been in the works for several years, and he’s confident in Albregts as Marco’s next top executive.

“He’s a super sharp guy, well-equipped,” Gau said of Albregts. “He’s already made our company better … As an organization, I think we’ve done a good job of building a leadership team to take the company to the next level.”

Marco’s business has changed drastically over Gau’s nearly four decades with the company. Founders Dave Marquardt and Gary Marsden created the company from a small typewriter shop in St. Cloud they purchased in 1973.

Marco started off by selling typewriters, but, with the advent of modern computing and the internet, diversified its offerings over the years.

“Typewriters were how we made our money, and office furniture was one of the biggest parts of the business. But neither one of those are here today,” said Gau, who joined Marco after serving in the U.S. Air Force. “That tells you we’ve built a resilient business model and we’ve been able to adapt to changes in the marketplace.”

After typewriters and office furniture, the company later branched out to copiers and printers, and dipped into IT-related services, then known as “computer networking.”

“As the IT business unit evolved into more complex tools for our customers, so did the business model,” said Gau, who first met Marco’s founders while he was a business student at the University of North Dakota. “We went from a computer on someone’s desk to networked computers to remote access. These were big inflection points. The internet was a huge inflection point.”

These days, Marco still provides old school office products like copiers and phone services, alongside cybersecurity services, data storage, and more. In 2020, the company logged annual revenue of more than $400 million, Gau said. Under his watch, Marco grew its total headcount from about 160 employees to more than 1,200. The company is still based in St. Cloud, but now has 54 locations in the U.S., including more than a dozen offices in Minnesota. The company also has a significant presence in the Dakotas, Wisconsin, Iowa, and elsewhere.

Gau said he’s proud of the company culture he’s helped develop over the years. He notes that he and his team have helped build long-term careers for dozens of people.

A year ago, Gau was a guest on TCB’s “By All Means” podcast, where he shared a number of leadership lessons he’s learned during his long tenure at Marco.