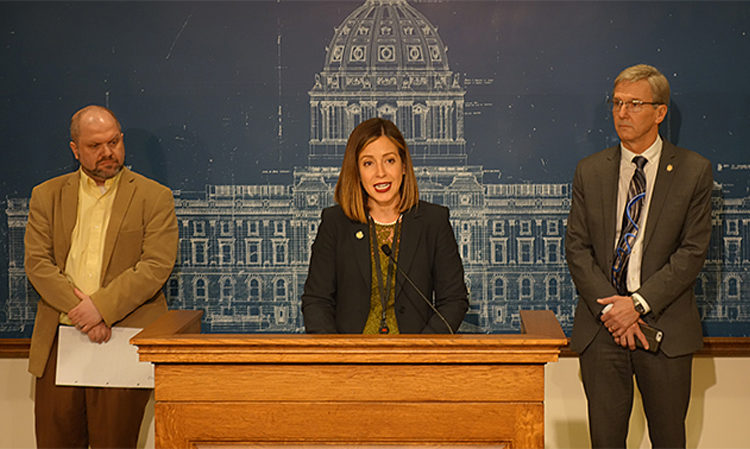 Is the Legalization of Recreational Marijuana in Minnesota Inevitable?

Recreational marijuana probably isn’t coming to Minnesota this year. But the debate at Legislature has already become largely about when, not if, it will happen.
By Peter Callaghan
January 31, 2019

The dilemma facing the Minnesota Legislature is the same one confronting a bunch of states. If there really is momentum behind the legalization of marijuana for recreational purposes, do they join up now or wait until it becomes inevitable?

Waiting conflicts with a fundamental Minnesota value: being a leader on public policy issues. If it can’t be first, at least it likes to think it’s best. Indeed, there are still past and present elected officials who think the state’s late-in-the-game medical marijuana program is a model, despite its need for repeated changes to make it viable medically and economically.

So if broad legalization of marijuana is inevitable, can the Minnesota psyche handle being behind (at least) 10 other states, including Michigan? And Canada? Or, for want of a better-written initiative, North Dakota?

“We have two options in front of us,” said Rep Mike Freiberg, DFL-Golden Valley Monday. “One is to attempt to get in front of this issue and put strong public health protections in place. The other is to wait for it to come to us.”

‘The ship is sailing’

Monday saw the introduction of several marijuana-related bills. House File 420 (yes, that’s the real number) and Senate File 619 would legalize and regulate marijuana for those over the age of 21.

While the introductory details of a bill that will likely go through many changes might have little consequence, the companion bills would set a date of January 1, 2020 for legalization. While the bills are silent on how or how much recreational marijuana would be taxed, they do set aside some future revenue: for police training to recognize drivers impaired by the psychoactive component of marijuana; for mental health treatment; and for public education on the effects of the drug — especially among children.

The bills also have provisions to expunge criminal records of those convicted of simple possession. Sen. Melisa Franzen, DFL-Edina, said the two aspects of marijuana policy, legalization and expungement, should be in the same legislation.

“I think they do go hand-in-hand because the people who have been hurt by the prohibition are the same people that we are trying to restore in terms of restorative justice and race justice with this bill,” Franzen said.

Sen. Scott Jensen, a family practice doctor from Chaska and a Republican, said he would not have imagined three months ago that he would be standing as a co-sponsor of legalization legislation. But he said he had constituents ask him to get involved and spent time studying results of medical research and the experiences of states that have legalized marijuana for those over age 21.

“I think the ship is sailing,” Jensen said. Even in his relatively conservative district, well over 90 percent of those attending a town hall meeting over the weekend said they favored at least having a discussion about legalization.

Jensen said he doesn’t prescribe medical marijuana but does refer patients to other doctors who will. That said, he thinks it has a medicinal benefit and said most of his patients over the age of 50 — three-fourths or more — have conditions for which the state program allows its use. “If people want medical marijuana, they can get it,” Jensen said.

No rush in the state Senate

At the very least, the state Legislature will talk about legalization in 2019, even if it is only one house of that Legislature. But opposition — or at least a lack of urgency — in the state Senate suggests it won’t pass in 2019.

Earlier this month, Gov. Tim Walz reaffirmed his support for legalization, regulation and taxation of marijuana, but he also said the Legislature should discuss concerns raised by opponents. “It should happen as fast as Minnesotans are comfortable with,” he said.

Walz said he thinks it could happen this session. But the leader of the state Senate., Republican Majority Leader Paul Gazelka, R-Nisswa, said while he thinks there will be a “conversation” this year, he doubts the Senate will be ready to vote on the issue.

“There’s gonna be a lot of conversation related to that,” he said. “I’ve mentioned a number of things I’m concerned about. I’m concerned about homeless rates are up, car accidents are up, mental health development for youth is down. So there are issues I’m already raising red flags about. I want to hear what other states, what the results are.”

His reluctance is also tied to opioid abuse legislation, Gazelka said, “Why would we suddenly, on the other side, expand with recreational marijuana?”

There is debate about the impacts of marijuana when it comes to impairment and addiction. Proponents, however, don’t necessarily say marijuana is good for people, outside some medical applications. Instead, they say it is not different enough from alcohol to justify treating it differently.

Jensen said he would give the same advice to a patient who asked about recreational marijuana that he would if they asked about alcohol or tobacco. “There’s no study that says it’s good for you,” Jensen said. “If there’s a medical condition we’re treating, it may well provide enhanced health. But in terms of using it recreationally, I’m not going to stand in front of a group of people and say that’s good for people.”

But he said with regulation comes a more consistent and purified product. And more use could broaden use for medical conditions not yet allowed by state law.

Opposition among DFLers, too

The issue is technically bipartisan, although DFLers tend to be more supportive. Not among those DFLers, however, is Sen. Chris Eaton of Brooklyn Center. Eaton is a leader in the drive to impose fees on the pharmaceutical industry to fund the state’s response to problems associated with opioid abuse. She said she is a no vote on recreational marijuana and said she doubts it will even receive a hearing in the Senate this year.

“I’m glad we’ll have another year to talk about it,” she said.

Her opposition stems from her work with drug and alcohol addiction and recovery issues. “I don’t think we do a very good job with alcohol,” Eaton said. “To add another ‘alcohol’ equivalent to the mix with the same percentage of addiction, the same impediments to driving” isn’t a good idea.

Eaton has supported moves to decriminalize possession of marijuana, mostly due to racial justice issues raised by the high numbers of convictions among people of color. But she said she hasn’t been able to arrive at a way to distinguish between small possession and larger-scale production and distribution.

There are other measures, most notably a proposed constitutional amendment that would ask voters to approve a change that would legalize marijuana for recreational use. While some have raised the question of whether this issue rises to the level of the state constitution, it is the only way to put matters before voters.