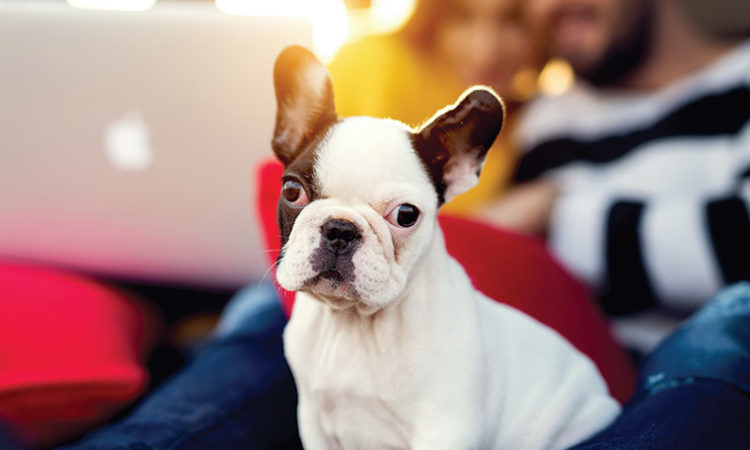 Pets at work is going mainstream, whether older employees like it or not.
By Emily Sweeney
November 01, 2017

For some companies, bring-your-pet-to-work day is becoming an office lifestyle.

“I’m obsessed with dogs; I like them in the office,” says Heather Manley, CEO of On-Demand Group. “I think they are therapeutic.” Her family-owned 21-year-old IT consulting and staffing business has allowed pets in the office since the company moved to Uptown Minneapolis in 2010.

Manley says dogs who come with their owners to the office are well-behaved and don’t shed heavily. The “policy” she articulates is common sense: If dogs are aggressive or bark often, they should not come to work.

“I personally have a dog that’s very possessive, so I don’t bring him in,” she adds.

Dogs are the most popular pets in the Uptown office, but Manley says she’s open to other animals as long as owners have a workable hygiene plan. Having clean, well-behaved pets is essential to their acceptance in the workplace, says Susan Thomas, OfficeTeam’s Twin Cities regional vice president.

OfficeTeam conducted a worker survey, with 394 responses from workers in office environments around the U.S. Forty-two percent of men replied they don’t like or hate having pets at work, while 37 percent of females felt this way, Thomas says.

There was some variance by age in workplace pet appeal: Millennials (ages 18 to 35) most liked having pets at work, with 74 percent positive responses. More than half of Gen Xers (35 to 54), however, disliked the idea of pets in the workplace.

The Nerdery, a Bloomington-based software-development company, has about 30 pets accompany their owners to work at its Minneapolis location. Communications director Mark Malmberg says the business evaluates workplace dogs on a case-by-case basis. The office requires dogs to be on leashes, have up-to-date vaccinations and take regular breaks outside.

“It’s a great conversation starter and icebreaker,” says Laura Livingood, digital integrated marketing manager. The office has proven a great place to raise Winnie, her Goldendoodle. Livingood liked being able to socialize Winnie, while a puppy, with other dogs and people. Bringing Winnie to work allowed Livingood to train the dog throughout the day, not just after work.