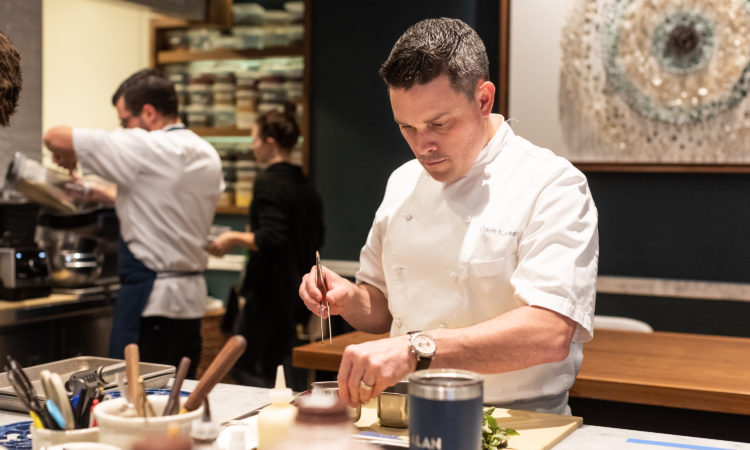 The award-winning chef is at home running restaurants in hotels—just don’t call this a “hotel restaurant.”
By Tess Allen
March 26, 2021

A two-time James Beard award winner and the founder of the Minneapolis-based Soigné Hospitality Group—which owns and operates Minneapolis restaurants Spoon and Stable and Demi, as well as Bellecour Bakery at Cooks of Crocus Hill and the KZ ProVisioning catering company which fuels the Minnesota Wild and Minnesota Timberwolves’ professional athletes—Kaysen will oversee the creation of a full-service restaurant, café, and bar on the Four Seasons Hotel Minneapolis’ property.

“It’s really a three-party agreement,” said Rick McKelvey, vice president of commercial development for United Properties, which owns the building that will house the upcoming hotel and restaurant. “We own the hotel and restaurant. Four Seasons is the operator and will oversee the general operations of the building—safety, security, and big-picture operations. And Gavin, in a contractual sense, is the licensor.”

And while a partnership with the Four Seasons Hotel Minneapolis, coming to the RBC Gateway in downtown Minneapolis at the corner of Washington and Hennepin Avenues, is an undeniably huge move for the chef and his brand, it’s not his first tango with high-end hotels—or even the prestigious, 60-year Four Seasons hotel and resort brand.

Before moving to Minneapolis in 2014 and opening Spoon and Stable, Kaysen worked as the executive chef and director of culinary operations for Café Boulud Worldwide, a restaurant founded by Daniel Boulud with locations in New York City, Palm Beach, Toronto, and The Bahamas.

Working with high-end hotel brands like the Four Seasons offers Kaysen, he said, the chance for brand stratification, motivation, and broadened perspective. “Having worked for a company [Café Boulud] that associated with high-end brands like this, I got to see what it meant in terms of how we stepped up our game, how we got better,” he said. “We learned a lot from the hotels: how they create hospitality moments, how they do business. You sort of learn all these different ways to look at things from a global perspective versus maybe just a very insular, in-your-own-bubble perspective. I see this partnership as having a lot of advantages in store for us and the Twin Cities.”

And while these are certainly perks of being attached to and operated by other high-end brands, Kaysen said that his restaurants within hotels aren’t really much different from the stand-alone restaurants he’s owned and operated himself.

Even though his new restaurant will be inside of the Four Seasons Hotel Minneapolis, it’s not a  “hotel restaurant,” Kaysen explained. “A hotel restaurant, to me, is a restaurant that is there to service everything inside the hotel—room service, banquets, everything. In my restaurant, we are going to do breakfast, lunch, and dinner inside of that restaurant. The banquets and room service and the fourth floor pool, which will also have a restaurant, those will all be managed by the Four Seasons, not by me. So I would consider those very heavily hotel-centric, and I would consider what we’re doing to be very independent restaurant-centric.”

Bolstering his point, Kaysen said that he and his team have total control over everything about the restaurant: the name, design, feel, and food and beverage concepts. “We’ve been involved in every single key decision that’s been made. It’s no different than when I open a restaurant that’s solely mine,” Kaysen said. “Of course every deal is different, but in all of my experiences with different hotel groups, they’re always 100 percent supportive of my team’s decisions.”

McKelvey confirms: “When it comes to the restaurant and its menu, the feel, the vibe, the level of hospitality and service—it’s really Gavin’s restaurant. We’re all in business together to make it as successful as possible, but at the end of the day, it’s his vision and his creation that we’re believing in.”

“We chose Gavin to head up the restaurant because of his approach to hospitality…his desire to make an experience for his guests,” McKelvey said. “We think that the combination of Gavin Kaysen and Four Seasons is a perfect fit.”

Details about the restaurant’s concept and menu will be announced in the coming months.

Kaysen’s partnership with Four Seasons is one of many recent partnerships between prominent Twin Cities chefs and hotel-based restaurants, including Ann Kim—James Beard award-winning chef and owner of Young Joni, Pizzeria Lola, Hello Pizza, and Sooki & Mimi—who opened her most recent restaurant, Kyndred Hearth, in the Omni Viking Lakes Hotel in Eagan; and Chef Steven Brown—James Beard finalist, chef, and owner of Saint Genevieve and Tilia—who signed a five-year contract in 2019 to head up Giulia in Hotel Emery alongside head chef Josh Hedquist.