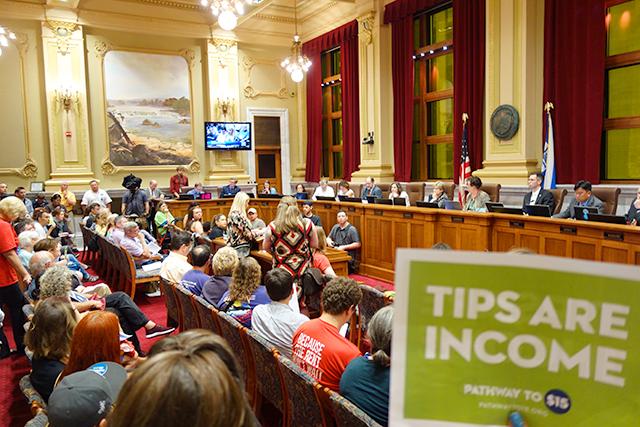 Several speakers said big employers, such as retailers like Target and fast food companies like McDonalds, should not get five years to reach $15 an hour.

It turns out that the substance of the ordinance has been decided for weeks, if not months.
June 27, 2017

Thursday's long-awaited public hearing on a city only minimum wage in Minneapolis was long and often emotional, taking nearly six hours with testimony from more than 150 people. Council vice president Elizabeth Glidden said it was the longest public hearing in the 12 years she’s been on the council.

But it might not have changed many minds among council members. Long before it was convened, a large majority had publicly announced their position on the big issues surrounding the policy, which would eventually raise the city's minimum wage to $15 an hour. In fact, the ordinance that was the subject of the hearing has 10 sponsors among the 13 council members.

So those who support the wage ordinance as drafted knew even before the meeting that they had prevailed. Nearly three years after launching a campaign — and taking full advantage of the fact that city officer-holders in the midst of reelection campaigns — $15 wage advocates could have considered the meeting as something of a victory lap.

Those activists, however, said they didn’t want to take success for granted. And there remain a few issues on the margins to be decided. Council members may still try to extend the phase-in period for the wage, especially for smaller employers. Or they may try to speed it up, especially for the city’s large employers. A proposal for a 90-day training wage also remains in question.

But the substance of the ordinance has been decided for weeks, if not months. Even before 16 listening sessions were conducted throughout the spring — and well before city staff drafted their report on the issue — Mayor Betsy Hodges and a majority of the council said they wanted a $15 minimum wage. The only contentious issue left to decide was whether restaurants would be allowed to count tips to calculate what they pay tipped workers, which a majority of council opposes.

Throughout the hearing, support for the higher wage was broadly consistent. That is itself significant; as recently as a year ago, there were not enough council votes for such a thing.

Ricardo Levins Morales said he owns a screen printing shop and art studio and offers his employees $15 an hour at hiring. “I make and sell art,” he said. “If I could keep my workers’ wages down, I could save some money. But if 70,000 of my neighbors could start to spend beyond the bare necessities, I would see a tremendous expansion of my potential customer base.” According to city research, 70,000 is the number of workers that would benefit from the higher wage level.

“You cannot have a tale of two cities right now,” said Emily White, an activist. “This is the opportunity for all of you to finally decide are you going to stand with workers, are you going to stand on the side of justice, of equity? Or are you going to side with big business?”
Sondra Williams, a United Food and Commercial Workers union member, told the council she works two jobs and sometimes does not see her children for more than a day. “I’m always at work. I don’t sleep much,” she said. “I really want you to support us because we need it.”

Speaking about the concern that Minneapolis businesses would be at a disadvantage due to a higher minimum wage, Wade Luneberg, the secretary-treasurer of Unite Here Local 17, said unions and the groups that pushed the wage in Minneapolis would expand their campaign to other cities. “The day after the Minneapolis ordinance passes — and it will pass — we will work elsewhere not just to help workers but to make sure there is a level playing field in the region for all businesses.”

Tip issue remains divisive
Hardly any of the 150-plus people who testified were opposed to the city acting on its own. Even the restaurant owners and workers who are seeking a tip credit (also known as a tip penalty by those who oppose it) often began their comments by endorsing a city only $15 minimum wage. But they also asked that the council reconsider their opposition to a credit.

As proposed by restaurants under the banner of Pathway to $15, a tip credit would only cover the increment between the state minimum wage and whatever wage is established by the council. That is, a server would be guaranteed the state minimum of $9.50 an hour and tips would be used to bring that wage up to the city minimum. If tips are not adequate to close that gap, the restaurant would be required to make up the difference.

“Tips are wages, not political headlines to be used to marginalize or divide an industry,” said Adam Borgen.

Ann Kim, co-owner of Young Joni and Pizzeria Lola in Minneapolis, lamented that the debate over the tip credit has become so polarized. “It appears that our city is heading down the path of one that does not allow for the financial structure of restaurant tipping, which for better or worse in ingrained in our industry,” Kim said.

Owners of other restaurants — including Spoonriver, Hell’s Kitchen, Lakes and Legends, Sanctuary, Loon Cafe, The Lowbrow, Northbound Smokehouse and George and the Dragon — also asked for a tip credit.

Sarah Webster Norton, a server who organized the Facebook group Service Industry Staff for Change, said they intended to get a tip credit “by any means necessary.” She said she has been a server for 20 years and has worked her way up to a wage, with tips, of $38 an hour. “I’ve clawed, bit, spit and kicked my way to where I am right now,” she said. “And I’ll be damned if I let this black and white, one-size-fits-all approach slaughter this business that I love.”

Opponents of such a credit — which they call a “tip penalty” — have argued that Minnesota is one of a handful of states that doesn’t allow a tip credit for the state minimum wage and that the city shouldn’t, either. They cite the prevalence of wage theft among restaurant workers in states with tip credits, and note that while some restaurant servers make much more than $15 an hour with tips, many workers in smaller restaurants and chains do not.

Several speakers also criticized the Pathway to $15 group for its connections to the state restaurant association, which lobbied the Legislature to adopt legislation preempting the city from being able to increase the wage. “We’ve seen other cities that have raised minimum wages and the restaurant industry has not collapsed,” said one speaker, Laura Lomax.

Several speakers said big employers, such as retailers like Target and fast food companies like McDonalds, should not get five years to reach $15 an hour.

And there was opposition to a segment of the ordinance that would allow employers of workers under age 20 to pay a training wage for up to 90 days. That wage would be 20 percent less than whatever the minimum wage was at any time.

“The young ordinance you propose is a complete joke,” said Cherokee Senevisai, a 16-year-old who said he works two jobs, one tipped, one not. “We walk the same streets as you, we breath the same air. The difference is the way we see our checks. I see mine and see the money that goes to the bills that have to be paid.”

The council is set to consider any amendments to the ordinance next Wednesday at 10 a.m. If the committee of the whole approves it that day, the measure will move to the full council for appoval on Friday June 30.