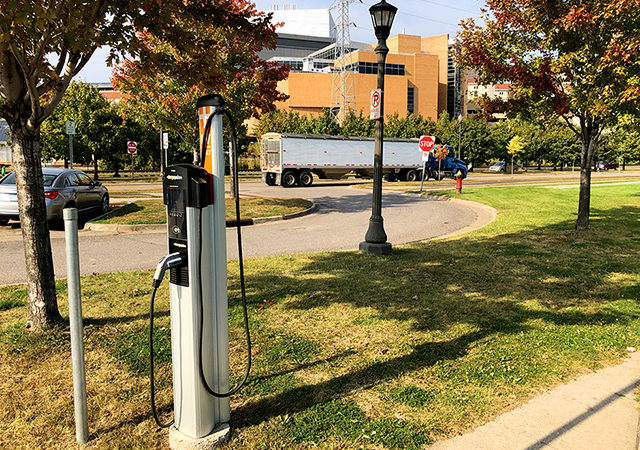 As of June 12, 2021, Minnesota has a total of 1,171 public EV charging stations. MinnPost photo by Bill Lindeke

A fact sheet from the Biden administration estimated Minnesota would receive $68 million to build EV chargers across the state.
By Ashley Hackett
August 12, 2021

With the recent Senate passage of a $1.2 trillion infrastructure bill, states are looking for what level of federal funding they might expect for their own projects. The Biden Administration released preliminary numbers last week, giving Minnesota a glimpse at projects it might be able to complete after final passage of the infrastructure package. Some big-ticket items were $4.5 billion for highways, $302 million for bridge repairs and $802 million to improve public transportation across the state.

In addition to those funds, the White House said Minnesota can expect to receive $68 million over the span of five years to “support the expansion of an [electric vehicle] charging network in the state.”

This is a relatively small investment compared to the rest of the cash Minnesota could receive, but experts say this would be a huge opportunity to get more Minnesotans to drive EVs and reduce their carbon footprint.

What difference can $68 million make?

As of June 12, 2021, Minnesota has a total of 1,171 public EV charging stations — this number does not include charging stations that people may have in their own garages or that they have purchased for private use.

The Minnesota Department of Transportation (MnDOT) estimates that there are 20,000 total EVs on Minnesota roads, with 61 percent being fully electric and the remaining 39 percent being plug-in hybrid EVs.

But Minnesota, which has millions of registered vehicles, has a goal of making 20 percent of cars on the roads electric by the year 2030 as part of the Clean Cars Minnesota initiative. Currently at less than one percent, the state has a long way to go. The federal funding from the infrastructure package may help a lot.

“This is pretty exciting for electric vehicles. You know, the $68 million would be far more investment than we’ve seen to date in the state of Minnesota for electric charging stations,” said Tim Sexton, assistant commissioner for MnDOT’s sustainability and public health division.

Sexton said one of the largest investments in EVs in Minnesota to date actually came from Volkswagen as part of a $2.9 billion settlement in 2016 after the German carmaker was caught cheating on particulate emissions testing. Each state received a share of the funds proportional to its number of Volkswagen vehicles. Minnesota received $47 million.

Sexton said that at this early stage, and before the infrastructure bill has officially passed into law (it must pass in the House before making it to the president’s desk to sign), it’s not possible to predict exactly how many EV charging stations the $68 million will create. But he said the investment will be crucial to areas in rural Minnesota where EVs are not as common.

Sexton said that with wait times of up to 30 minutes even for the fastest EV chargers, having only one “pump” at a station can be very difficult to plan for, especially if another driver gets there before you.

“What we need now is to really take the existing [EV charger] network, expand it a little bit but also make it more robust, so that it’s more like a gas station model where there’s a bank of fast chargers. If somebody is there or if one breaks down, you still can safely and conveniently get around and meet your travel needs.”

MnDOT, which is leading on expanding the state’s EV charging network, is focused on making sure people can use EVs to travel from more populated areas to rural areas of the state without worrying about running out of charge.

“If you live in Fargo, you should be able to travel to the Twin Cities,” Sexton said. “If you live in Rochester, you should be able to get to and from Mankato. So we’re focused on popular corridors and making sure that people could do those more common trips, along with providing chargers in other tourist destination locations like Brainerd or along the North Shore.”

Included in this order was the president’s desire to install the “first-ever national network of electric vehicle charging stations.”

When Minnesota Gov. Tim Walz announced the state’s Clean Cars initiative, reactions were split down party lines. Sen. Amy Klobuchar applauded the decision, saying in a statement that “inaction is not an option for our economy or our environment…[the initiative] is an important step toward not only reducing greenhouse gas pollution, but also helping consumers save money on gas, providing more electric options, and decreasing our nation’s dependence on foreign oil.”

As recent as this month, though, Republicans have been cautious to embrace EVs and Minnesota’s efforts to make them more attainable.

State Sen. Gary Dahms (R-Redwood Falls) spoke about EVs at a Farmfest panel earlier this month, where he said that he’s worried about rural Minnesotans being left behind as the state prioritizes electricity over gas, and that he doesn’t see how EV prioritization will work in rural America.

“We’re going to have a lot of places in rural Minnesota that are not going to have charging stations,” Dahms said. “Yet the options when you go to a dealer to buy a car, you’re going to have less combustion engine options and more of the electric options. But if you don’t have substations or stations to plug these things all over, how are they going to function? Our folks have a lot more travelling to get usually to their jobs and back and forth and move their commodities and stuff to market.”

Dahms pointed to broadband — another big infrastructure bill spending area — as an example of a state priority taking years to achieve and lagging behind in rural areas.

Still, $68 million could achieve a lot in the state of Minnesota, especially compared to the $7 million that was previously available for EV charging infrastructure.

“We are still in the early days of electric vehicle charging infrastructure rollout,” Sexton said. “You can travel around Minnesota right now with an electric vehicle. But now, the challenge is using the money to get chargers in crucial areas like Northern Minnesota.”

Walker Orenstein contributed to this report.