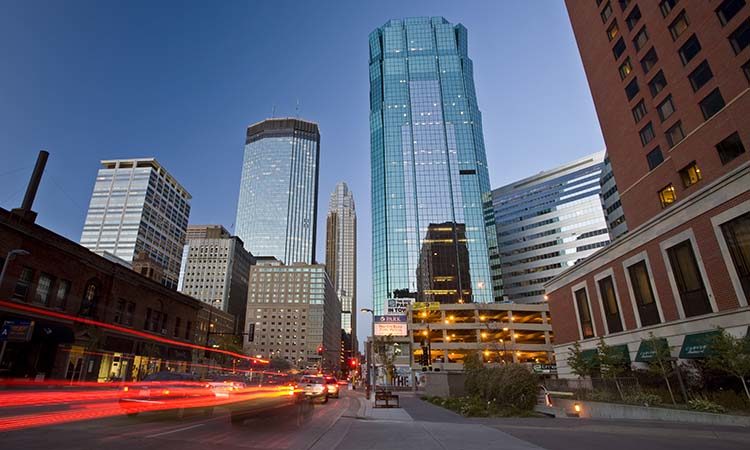 Demand for office space is higher in the suburbs than in the central business districts. Shutterstock

Third quarter commercial real estate reports suggest that the hybrid model will be with us for at least a while longer.
By Gene Rebeck
November 15, 2022

Are metro-area employees going back to the office or not? At this point, the answer appears to be: Sort of.

A trio of recently released Twin Cities-area commercial real estate (CRE) market reports covering the third quarter of 2022 offer some different datapoints on this topic. But the general upshot is that office-space vacancy rates continue to be high, even as the labor market remains fairly robust. This suggests that hybrid workers will remain the norm for some time. Demand for office space is higher in the suburbs than in the central business districts (CBD), but with employees coming in perhaps two to three times a week (if that often), many companies are shrinking their office footprints.

For instance, Toronto-headquartered CRE firm Avison Young, reports that about 3 million square feet of sublet space remains available market-wide in Q3. “That’s an all-time high, and about three times as high as the pre-pandemic levels,” says Max Nolan, an insight analyst at Avison Young’s St. Louis Park-based Twin Cities office. He added that the metro continues to experience “negative absorption” of existing office space. The Twin Cities is one of only three major markets that continue to post negative absorption rates every quarter since the pandemic started, the other two being Baltimore and Chicago. “The third-quarter [absorption rate] was definitely better than the first two, but still negative,” Nolan says.

According to the Avison Young report, metro-area tenants are continuing to show more interest in the suburbs than downtown but are slow to act, with deals taking nearly 40% longer to complete. The average leasing volume year-to-date stands roughly 20% below the three-year pre-pandemic average.

Nolan does see reasons for optimism. “There’s still interest, both in downtown and the suburbs,” Nolan says. “It’s just that people are slowing down their decision-making.” The suburbs are continuing to attract lessees, particularly in high-demand areas such as St. Louis Park’s West End. And the CBDs have scored some wins. In September, Prudential Financial announced it was a signing a lease for 28,000 square feet at the Dayton’s Project in downtown Minneapolis after selling its 450,000-square-foot office campus in Plymouth, which is being redeveloped.

Prudential’s move is good news for downtown Minneapolis. It’s also evidence of company office-space downsizing throughout the metro, one sign that many businesses expect to maintain a hybrid model. Nolan cites as another example UnitedHealth Group, which in the third quarter “began consolidating a bunch of space and subletting about 300,000 square feet.”

Companies including Ameriprise, U.S. Bank, and Wells Fargo have been asking their employees to come in to the office more regularly. Still, Nolan believes that “companies are definitely rethinking how much space they need—and, I would say, sticking to the hybrid model. We see companies coming back—it’s just a very slow process.”

To be sure, companies still need office space, but many “are happy to trade all the space they had for smaller, more renovated space with high-end amenities,” Nolan says. He terms this a “flight to quality,” adding that this flight began taking off last year. Those in-demand amenities, which include conference centers, fitness facilities, and collaboration space, aren’t “necessarily original,” he admits, but they are new and au courant in terms of design and technology.

Nolan also says that “rents are remaining resilient, which seems counterintuitive when you’re seeing high vacancy rates.” This could be due to the high demand for renovated, high-quality space, as well as little new office space being built. “The Twin Cities have the lowest annual deliveries [of new office buildings] in the last four quarters for any major office market,” he adds. “That’s helping us catch up and utilize the space we have.”

The Avison Young report that metro-wide vacancy rate in Q3 was 17%, a slight increase from Q3 2021. The urban market vacancy rate was about 21%, while the suburbs were at about 14%. “We feel [the vacancy rate} is going to remain elevated for several years because of the high sublet availability, the subdued leasing volume, the fairly slow return to office—and, of course, the overall economic uncertainty,” Nolan says.

Other CRE firms offer some different stats. In its Q3 report, Toronto-based Colliers International, whose Twin Cities offices are located in Minneapolis and St. Louis Park, reports that market-wide vacancy rose in Q3 to 11.5% percent, up 80 basis points year-over-year.

By contrast, the Twin Cities office of Chicago-based Cushman & Wakefield in Bloomington reported that that the metro vacancy rate decreased by 40 percentage points in the third quarter compared to Q3 2021. The reason? A reduction in inventory—that is, office space being taken off the market. In downtown Minneapolis, the biggest spaces that went offline were the Northstar Center buildings, which total about 680,000 square feet. Sherman Associates is converting Northstar East into apartments, while New York-based Taconic is updating the West building office space. According to the Cushman & Wakefield report, reductions in supply brought the Minneapolis CBD’s vacancy rate to 29.3%, down from 30.3% in Q2. Metro-wide, Cushman & Wakefield reports a Q3 vacancy rate of 24.6%.

Why the difference in vacancy data between the reports? Nolan says that CRE companies use “different borders for our submarkets” and measure vacant and occupied spaces somewhat differently. “We didn’t include Class C in our metrics in the market report,” he adds. “Other companies do. Everybody tweaks the methodology a little bit.”

A recession and a weakening labor market could make it easier for some companies to require employees to come back to the office. But for now, metro-area CRE reports suggest that the hybrid model will remain in place for some time.