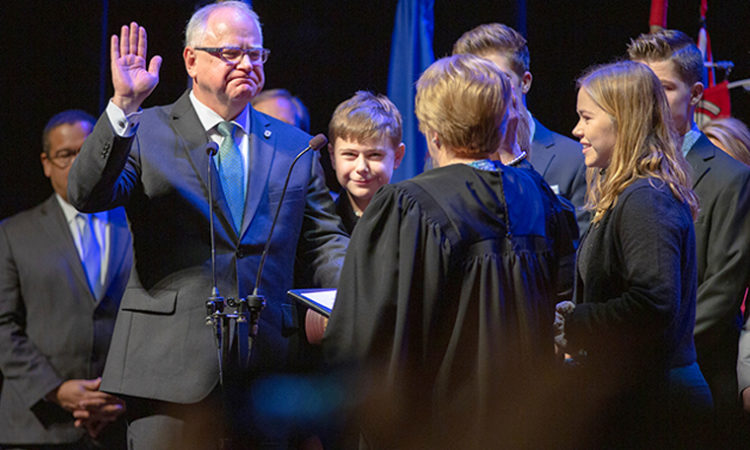 Gov. Tim Walz, surrounded by family, taking the oath of office Tuesday at the Fitzgerald Theater in St. Paul. ( Photo by Lorie Shaull/MinnPost)

Education was featured prominently in Gov. Tim Walz’s remarks, but he also highlighted a theme that was a big part of his campaign — that the state has addressed tough problems in the past and can do so again.
By Peter Callaghan
January 10, 2019

In his first speech as Minnesota’s 41st governor, Tim Walz talked about many of the themes he focused on during his successful 2018 campaign. Only slower.

Known for a rapid-fire speaking style that sometimes skips over things like words, phrases, or complete sentences, Walz struck to the prepared speech and stressed what he calls fundamentals: quality schools, access to health care, equity and infrastructure.

Short on specifics, the DFL governor’s relatively short — 20 minute — address only mentioned “One Minnesota” six times, a message he acknowledged had also been on the agendas of previous governors.

“As a history teacher, I found it instructive to look back at past inaugural speeches to see how incoming governors portrayed the situations facing them,” Walz said from the stage of the Fitzgerald Theater in St. Paul.

In the 1950s, DFL Gov Orville Freeman warned of increasing totalitarianism in the world. In the 1970s, DFL Gov. Wendell Anderson worried that health care and housing were becoming too expensive, while GOP Gov. Al Quie pledged to eliminate discrimination in all of its forms. And in 2011, DFL Gov. Mark Dayton lamented that reduced funding had damaged the public schools.

“But we can and must do better. Old ways of doing things must be updated. New solutions must be found for new problems. We must continue to aim higher, reach further, and build brighter futures for the people of our state.”

While there was plenty of policy in the speech, there was also lots of the personal. Before taking the oath of office from Minnesota Supreme Court Chief Justice Lorie Skjerven Gildea, Walz snapped a selfie with his daughter Hope. Then, early in his speech, he read a line his son Gus wanted included, based on one of Walz’s first campaign pledges: that if he won, he’d get his son a dog.

Sticking to a familiar theme

Walz began the day be entering the theater in what the program called a “Procession of Educators” that included his wife, Gwen, some of his own teachers and professors and some of his own students when he taught high school in Mankato. After introducing his mother, Darlene, and his in-laws, Val and Lynn Whipple, he used a line he often employed during the campaign: “You know what they say, behind every governor is an astonished mother-in-law.”

Education took the lead position in his remarks, as he pledged again to make Minnesota the Education State. While there were no specifics in the speech itself, Walz often talked during the campaign of restoring education funding to pre-recession levels, including inflationary increases. Dayton increased education funding each year — and Republicans in the Legislature have added money as well — but Walz is expected to propose increasing such spending in his first budget, due Feb. 19.

“Minnesotans, let’s recognize some simple truths: Education is the great equalizer of society,” he said. “Education unleashes untapped potential. Education conjures the magic of promising beginnings and the grace of second chances. Putting a young child on a yellow bus to pre-kindergarten in St. Cloud can prevent him from riding a prison bus to Stillwater.”

At the end, Walz returned to a campaign theme: that the state has addressed tough problems in the past and can again.

“There’s no doubt about it: We face some tremendous challenges in the coming years,” he said. “Our economy is changing. Health care costs are soaring. Even the climate is unstable, causing devastating weather events. But we must face these challenges with a quiet confidence that can only be found in Minnesota, with a bipartisan pragmatism, and a humble determination to lead the Bold North.

“But we can only do this if we come together. … Our blood saved the Union at Gettysburg. Our iron forged the tanks that liberated Europe. Our farmers sparked a green revolution that fed the world. Our imagination transformed medicine. One Minnesota is who we are. We just need to foster it. Together as One Minnesota, we don’t fear the future. We create it.”

Walz was the last of the five statewide elected officials to take the oath during the 90-minute ceremony. Before him came new Attorney General Keith Ellison, new state Auditor Julie Blaha and newly re-elected Secretary of State Steve Simon. Just before Walz took his oath came the history-making Lt. Gov. Peggy Flanagan, the highest ranking Native American in any state government. She was sworn in by state Supreme Court Justice Anne McKeig, who, when appointed by Dayton, was the first Native American state supreme court justice.

Flanagan described her life story as a “One Minnesota story,” because she was boosted by education, helped by social programs but also “filled with contradictions.” To illustrate those contradictions, she took her oath of office while holding her hand over a Bible from 1854 that had been translated into the Ojibwe language. 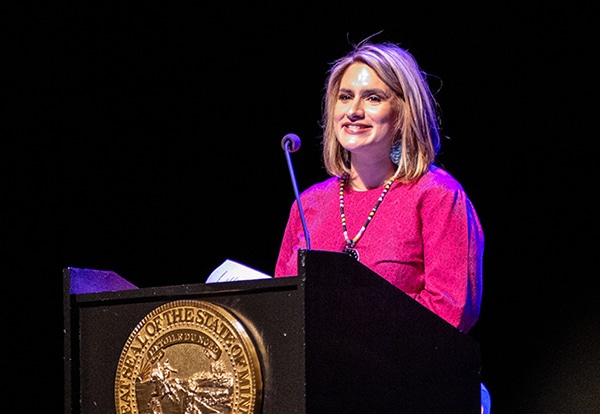 Lt. Gov. Peggy Flanagan described her life story as a “One Minnesota story,” because she was boosted by education, helped by social programs but also “filled with contradictions.” (Photo by Lorie Shaull/MinnPost)

“I chose this Bible because it has deep spiritual meaning to me as a Catholic — but this Bible also was a tool used to erase Native people’s culture and traditions,” Flanagan said. “These contradictions are present throughout our history. I stand before you now as a leader of the executive office of Minnesota—an office that oversaw horrific treatment of my ancestors. An office whose governor once declared that our Dakota brothers and sisters, and I quote, ‘Must be exterminated or driven forever beyond the borders of Minnesota.’”

“And yet this is the same office … thanks to Governor Mark Dayton’s actions in 2012 … that repudiated those hateful words and actions of a previous administration. Thank you, Governor Dayton. I’m happy the Dakota people are still here.”

Walz and Flanagan hosted a reception in the Capitol Rotunda Monday afternoon and will be feted as inaugural events in Duluth on Thursday, in Mankato on Friday, in Minneapolis on Saturday and in Moorhead on Monday.

More ceremony is scheduled in the capitol Tuesday when the 2019 session of the state Legislature convenes with all House members being sworn in and elections for House leadership, including new Speaker Melissa Hortman, beginning at noon.