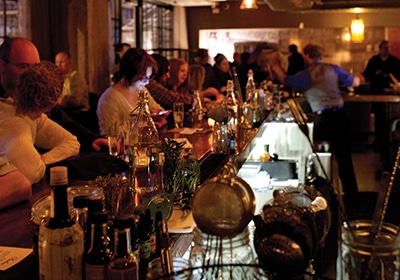 Impress Clients With Dinner In A Happening Twin Cities Neighborhoods

The North Loop
If your clients remember the good old days in New York when Bloomingdale’s hadn’t yet settled in Soho, and Tribeca was uncharted territory, they’ll appreciate an evening in the North Loop, which encompasses the historic Minneapolis Warehouse District. Take a quick spin to see the yin and yang of sturdy brick factories and sleek contemporary lofts, then revel in the grit-is-the-new-glamour vibe at Borough in the Else Warehouse. Weather permitting, the loading-dock patio is a fine place to enjoy an old fashioned made with Jim Beam rye, or a pint of Fulton Lonely Blonde, brewed right around the corner. The dinner menu takes a page from modern-day Soho, with an inventive mash-up of American, French, Asian, Mediterranean, and Middle Eastern flavors and technique.

Seward
Clients who like Seattle’s quirky urban neighborhoods will enjoy Seward, one of the oldest neighborhoods in Minneapolis. Named after William H. Seward, New York senator, governor, and U.S. secretary of state under Abraham Lincoln, the neighborhood is known for its strong sense of community, liberal politics, and the fact that Bob Dylan recorded part of Blood on the Tracks at the former Sound80 Studio. Drive slowly around the neighborhood so you can admire the tidy homes, well-tended gardens, and marvel at the 10-acre Matthews Park less than a mile from downtown Minneapolis. Join Seward locals and Twin Cities locavores at Birchwood Cafe for a dinner of handmade pasta, pizza, and other sustainably produced specialties, followed by a slice of their justly famous Key lime pie.

Summit Hill
Long before Baz Luhrmann decided that The Great Gatsby was hip, Summit Hill was home to generations of well-heeled families, as well as a new generation of 20- and 30-somethings who appreciate the leafy cobblestoned streets, Victorian homes, and a vibrant mix of indie shops, boutiques, bakeries, craft brewpubs, and restaurants, just minutes from downtown St. Paul. Take your clients for a drive on Summit Avenue and point out the F. Scott Fitzgerald house at 599 Summit, a Romanesque revival rowhouse designed by prolific St. Paul architects William H. Willcox and Clarence H. Johnston. After a pint of—what else—Summit at the Muddy Pig, savor an osso buco and other classic Italian dishes at La Grolla, a buzzy neighborhood trattoria.

Lowertown
As is true of many fashionable neighborhoods, food is at the heart of Lowertown, downtown St. Paul’s bohemian brother. Since 1902, street life has centered on the St. Paul Farmers’ Market, open eight months of the year and steadfastly selling only locally grown and sourced products. Lured by the light-filled warehouse spaces, coming light-rail transit, and a new Saints stadium, real estate developers are joining the community of artists, musicians, restaurateurs, and entrepreneurs who contribute to Lowertown’s creative vibe. To catch the spirit, start with a pint of Duvel and an amuse-bouche of Belgian-style frites at Amsterdam Bar & Hall, then taste the fruits of the farmers’ labors at celeb chef Lenny Russo’s Heartland restaurant in the historic Market House Building.