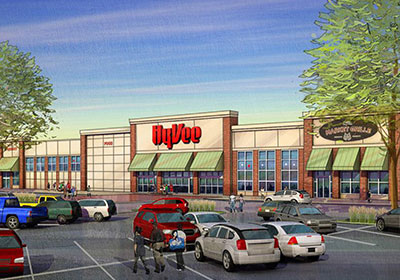 The locations in Oakdale and New Hope are the first in an aggressive plan to butt heads with top dog Cub Foods.
October 02, 2015

Hy-Vee takes its first step into the Twin Cities grocery market with the Tuesday opening of stores in Oakdale and New Hope.

The new stores are large—the Oakdale location is 90,000 square feet—and will the typical produce, boxed goods and other grocery items you might expect, as well as several features meant to set it apart. Those include a full-service restaurant, pharmacy, in-store clinic, florist, sushi bar and a Starbucks coffee shop, according to the Pioneer Press. Ads included with local newspapers tout the store’s extensive grab-and-go options for family dinners.

The employee-owned company based out of West Des Moines, Iowa, is aggressively targeting the Twin Cities. It will open stores in Brooklyn Park and Lakeville, as well as two other locations, during the next year. The company said it will open another four to five stores every year after that.

The grocer has its target on local grocery giant Cub Foods, but also faces competition up and down the price spectrum from the likes of Walmart, Target, Lunds & Byerlys, Kowalski’s, Trader Joe’s, Whole Foods and local coops. TCB wrote about the food fight taking place across the metro as many cities, especially locations like Woodbury, are bursting at the seams with competition.