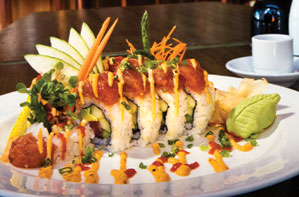 Most people, if they eat wasabi, mix a little with soy sauce and dip their sushi in it. Others (I am one) eat wasabi plain, slathering it on their tuna rolls like peanut butter and weeping throughout the meal. The cool fire lights up the sinuses, like a combination of cayenne pepper and Vicks VapoRub.

But if you’re eating sushi locally—even at high-end places that fly fish in daily—you’re not eating fresh wasabi. In fact, you’re probably not eating real wasabi at all.

Wasabi is a Japanese root, part of the cruciferous family Brassicaceae, which includes cabbages, mustard, and horseradish. Chefs I spoke to estimated the price of a single root (five to seven inches long) at about $35.

In its place, they’re using wasabi powders that can be marginally authentic—meaning they contain a small percentage of wasabi root—or just consist of American-grown horseradish, hot mustard extract, and blue and yellow food dye. The powder is reconstituted with water to form a Play Doh–like paste.

On a quest to find real wasabi, I started at Wasabi, an inexpensive spot on Washington Avenue that serves terrific sushi platters and affordable bottles of wine in a kitschy space. The wasabi at Wasabi has a ferocious bite that delights me. Fresh wasabi actually is milder, the chef told me. No disappointment, then; those of us who love the heat probably prefer Americanized paste.

Next, I went to Origami, where the chefs wear ties and aprons and remind me of the courtly North Minneapolis butchers of my youth. Executive Chef Koko insists that his paste has real wasabi in it. (He handed me the package as proof, but everything was written in Japanese.) Origami is Minnesota’s gold standard for sushi. I had octopus ceviche and Dynamite Maki with yellow tail and garlic bean sauce. As promised, the realer-than-most wasabi had a surprisingly mellow taste.

At Anemoni, food preparation is theater. This is the most beautiful sushi bar in the Twin Cities. Chefs here—including a master named JosÃ© who came from Cosmos a year ago—are into fusion. The best thing on the menu now is the Double Crazy: a monstrous roll made of tuna (chopped inside, tartare on top), plus asparagus, cucumber, chili oil, sriracha, and chopped serranos. This is the nacho platter of the sushi world and a dollop of “wasabi” from Wisconsin is like guacamole on top.

Editor’s note: Food and wine writer Ann Bauer is standing in for “Dining” regular Peter Lilienthal, who returns in March.