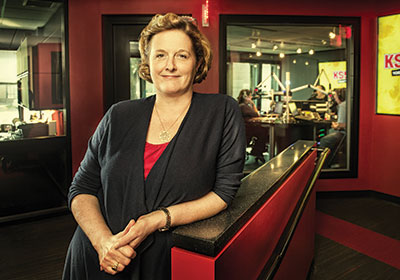 St. Paul-based Hubbard Radio, which has been buying radio stations in large U.S. markets, today announced that it is acquiring 30 percent of PodcastOne, a major podcast network.

PodcastOne, based in Los Angeles, is the country’s largest advertiser-supported podcast network and it is led by Chairman and CEO Norm Pattiz, who has been in the radio syndication business for more than 35 years.

Ginny Morris, chair and CEO of Hubbard Radio, said in a Sunday interview with TCB that it took only a month to construct this deal—from the first meeting to a contract signing.

“They’ve been looking for the right investors—looking for a strategic partner,” she said. “An opportunity arose and we seized it.”

Financial terms of the deal were not disclosed, but Morris said that Hubbard Radio paid cash for its stake. In 2011 and 2013, Hubbard Radio used debt to finance purchases of radio stations in Washington, D.C., Chicago, St. Louis, Cincinnati, Seattle and Phoenix.

Hubbard Radio has been deriving limited revenue from podcasts, because Morris said her stations primarily have been repurposing their radio shows and posting them as podcasts for people who missed the live broadcasts.

Content being produced for PodcastOne is being created as original material for podcast listeners.

“I’ve been intrigued with the [podcasting] space since I listened to ‘Serial’,” Morris said. It was a 12-episode show produced in 2014. “There is a guy sitting in prison who claims to be innocent of killing his ex-girlfriend,” Morris said. “I downloaded it and would listen on my phone on airplanes and on walks.”

Morris is part of the trend of Americans becoming more aware of podcasts and more likely to listen to audio on-demand. A recent report released by Edison Research shows that 33 percent of those surveyed have listened to a podcast and 17 percent did so in the last month.

Traditional radio “remains very, very healthy,” Morris said, adding that more than 90 percent of Americans listen to local radio weekly. “We see every day that we are important to the daily lives of our listeners,” she said. “As an advertising medium, we help people grow businesses and sell products.”

Yet, both radio and television stations are reacting to consumers who want their entertainment on-demand.

When one scans the podcast offerings of PodcastOne, many of the names are nationally-known. Through the acquisition deal, it’s unclear whether Hubbard Radio talent in the Twin Cities will be selected for national podcasts.

“All the opportunities that can be helpful to [PodcastOne] and to us need to be further explored,” Morris said. However, she added, “There is definitely an opportunity for local or regional talent to find a national audience through a distribution model like this.”

Based on financial data from BIA/Kelsey, a Virginia-based media consulting company, and Moody’s Investors Service, Hubbard Radio generates between $215 million and $240 million a year.

In a 2014 Fortune article, Pattiz estimated that podcasts in the U.S. would take in about $100 million in revenue this year, with PodcastOne garnering the biggest share.

PodcastOne is currently profitable, and Morris said that Hubbard will be sharing in the profits. PodcastOne and its parent company, Courtside Entertainment Group, will retain independent control of operations under the agreement with Hubbard Radio.

In a written statement, Pattiz said, “I view this as not only a great deal for both of our companies, but more importantly, for the radio industry as a whole. Embracing all forms of audio distribution, from broadcasting to streaming and on-demand is what will drive radio as a medium, continually growing and on the cutting edge.”

Pattiz founded Westwood One, which is familiar to many radio listeners because it provides news, sports, entertainment and other radio programming to stations across the country.

Pattiz, who serves on the University of California Board of Regents, is a high-profile fan at L.A. Lakers games, where he can be seen chatting with celebrities.

Asked about her new partnership with Pattiz and PodcastOne, Morris said, “Both [company] cultures are aggressive and entrepreneurial. I would say Norm is very L.A. and we are very Minnesota. That’s going to be interesting and a lot of fun.”