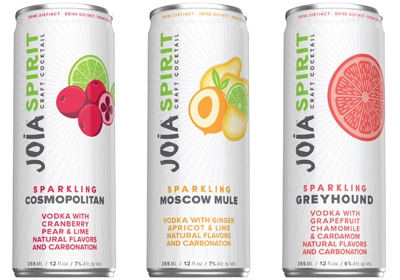 After studying how customers used its product, St. Louis Park-based Joia took that information and developed a new product that’s attracting deals with the Target Center and even a Vegas hotel chain.
October 24, 2016

In the last five years, natural sodas line Joia has landed on more store shelves—from grocers like Kowalski’s and Fresh Thyme to restaurants like Panera and even Surdyk’s liquor stores. All the while, as the number of locations offering Joia grew into the hundreds, Bob Safford, who is CEO of Joia manufacturer Boundary Waters Brands, grew aware of a trend surrounding his product.

“Our soda product was being used extensively as a mixer,” he told TCB. “It was basically a cocktail without the alcohol.”

In reaction to Joia’s unique demand, Safford decided to cut out the middleman and introduce a premixed, ready-to-go cocktail line called Joia Spirit. As of July, the drinks have been selling throughout Minnesota—so far in about 75 liquor stores and specialty grocers.

Like Joia sodas—which are made from fruits, herbs and spices—Safford believes the natural flavors of his premixed cocktails, or “alcopops,” are what separate the product. “Our Greyhound, our Moscow Mule, our Cosmopolitan all taste like our versions of those cocktails,” he said.

“I mean, does anyone really need an alcoholic root beer?” he said of other popular alcopops. “It’s designed to cover up the taste of the alcohol because it doesn’t taste true.”

In anticipation of the Joia Spirit launch, Safford led two fundraising efforts this year with a goal to buy a larger sales team. After a successful $600,000 round in March and an $800,000 round in September, Safford anticipates using the bulk of the $1.4 million to bring on six new salespeople.

As Joia looks to tap into a new list of venues—“we’re thinking golf courses, theaters and airports are some possible spots,” Safford said—the Joia Spirit line has already landed a major deal with the Target Center.

“We don’t have a done deal yet with the US Bank Stadium or the Xcel Energy Center, but we do have a deal in place with the Target Center,” Safford said. “Arenas are showing excitement about the product because for the first time it is a more female-oriented product.”

Even casinos and hotels are taking interest in Joia’s ready-to-go alcoholic drinks. After a former production partner with Joia became the director of purchasing for MGM Resorts in Las Vegas, Joia Spirit found its way into over 50 MGM-owned gift shops and convenience stores. According to Safford, Joia Spirit drinks are now the second-highest selling premixed cocktail drink throughout MGM, as many guests are in the hunt for alcoholic drinks priced cheaper than what’s in a hotel room minibar.

With the relatively young age of the alcopop market, data on the industry’s size is scarce. Yet, according to MarketResearch.com, when combining bottled or canned ice tea, coffee, fruit or vegetable smoothies, energy drinks, yogurt drinks and alcopops, the total market comes out to $23 billion.

Looking ahead, Safford sees potential for Joia Spirit to capture a greater slice of this market.

“We are looking to add another market yet this year that’s a little more counter seasonal,” he said. “We’re looking at Florida, Texas and southern California and trying to secure a distributor there. That’s the tough part of this—getting a distributor.”

If all goes well, Safford anticipates the company’s revenues will at least double in size by the end of 2017.