How Minnesota Stacks Up Against the States Our Gov. Candidates Fear the Most

When predicting the future of Minnesota, GOP governor candidate Jeff Johnson often evokes a single word to describe what could happen if his opponent, DFLer Tim Walz, is elected: California.

In one TV ad comparing his vision for the state to Walz’s, Johnson says: “One candidate sees a Minnesota where we all lose our health insurance, forced on to one government plan. Where we become a sanctuary state for illegal immigrants and where we pay even higher taxes. He wants us to be California.”

Johnson has even used the theme in a parody of Walz’s “One Minnesota” campaign theme and logo: 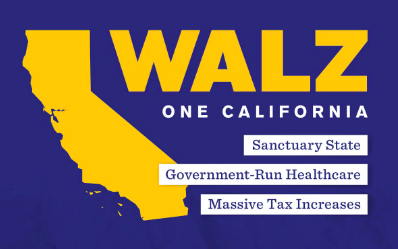 But Walz has his own geographic shorthand when forecasting Minnesota’s future if Johnson is elected: Mississippi.

At a forum with Johnson in Wayzata after each won the primary, Walz responded to Johnson’s charge that taxes would rise in a Walz Administration: “We are not a fearful people. We look to the future. We don’t fear the future, we create the future. This is a state that ranks at the top of so many measures. This is a state with a quality of life. And yes, you get what you pay for. I’m not interested in being Mississippi. I’m interested in being Minnesota.”

Both states are used to being stereotyped, of course. U.S. House Democratic leader Nancy Pelosi wouldn’t be as tempting a target for GOP advertising if she was from, say North Dakota. And there is even a Wikipedia entry for the phrase “Thank God for Mississippi,”defined as “a common adage in the United States, particularly in the South, that is generally used when discussing rankings of U.S. States.” But are the Golden State and the Magnolia State really such bad places? And is Minnesota really so much better?

MinnPost decided to take a look at how the three states stack up across a range of measures of the good life.

Since using states as bogeymen is very much a political trope, let’s first take a look at where California, Minnesota and Mississippi fall on the political spectrum: from raging liberal to raging conservative.

This is one area where the states represent three distinct pictures. In California, the governor’s office and both bodies of the state assembly are controlled by Democrats. In Minnesota, it’s mixed — Republicans control the legislature and Democrat Mark Dayton is the governor (though that’s changing in January and we don’t know who’ll replace him). In Mississippi, it’s a Republican trifecta, with both legislative bodies and the governorship held by the GOP.

Time and again, the issue Republicans most associate with California is taxes.  There are lots of different ways to look at that issue, but if you look strictly at per-capita state tax collections (including property, sales and gross receipts, license, income and other state taxes), Minnesota (#3) actually comes out in front of California (#8), according to the Census Bureau, while Mississippi is well below both states (#33).

Looking at a more specific tax issue in the governor’s race, Johnson points out Walz has supported raising the gas tax in Minnesota, which the Democrat wants to do to pay for infrastructure. When it comes to that specific tax, Minnesota’s in the middle of the three states.

Education has emerged as a big issue in the governor’s race, which makes sense since it’s the second-largest part of Minnesota’s state budget. Here, as with life expectancy, things don’t look so great for Mississippi. Mississippi’s fourth grade reading scores, for example, were far below that of California and Minnesota’s. Math scores are low too.

When it comes to adults with higher education, Mississippi, where just 21 percent of adults over age 25 have a bachelor’s degree or higher, ranks far below California (32 percent) and Minnesota (34.2 percent).

This seems like a good time to note that in terms of education (and income, and a lot of other areas), Minnesota looks good on average, but has pretty bad racial disparities. Though when it comes to education, Mississippi and California aren’t exactly models of racial equity, either.

What about the economy?

When it comes to economics, California, in the immortal words of Tupac, keeps it rocking. It’s the sixth biggest economy in the world, though the numbers look slightly less impressive on a per-capita basis.

It ranks seventh among U.S. states in terms of gross state product (the value of all the goods and services an economy produces) per capita, at $66,000, according to the Bureau of Economic Analysis. Minnesota’s per-capita gross state product edges somewhere near that, at about $61,000, earning it 13th place in the U.S. Meanwhile, Mississippi ranks 50th, at $36,029.

In terms of economic capacity, California is clearly the winner. But Minnesota comes out ahead when you look at another economic outcome: how many people are living in poverty. Minnesota’s poverty rate is 9.5 percent, one of the lowest in the U.S. That compares to a poverty rate of 13.3 percent in California and 19.8 percent in Mississippi.

There’s another aspect of the economy where Minnesota wins out, at least in this lineup: economic solvency, at least according to ratings agencies.

Bond rating institutions like Moody’s, S&P and Fitch assign credit ratings to states as a measure of how healthy their economies are — and how likely they are to be able to handle their debt load. Each of these institutions rates states on a different curve, but all of them rank Minnesota ahead of both Mississippi and California. (California’s rating is still recovering from a budget and cash flow crisis in 2008-09, and has enacted policies to make it a safer bet for lenders, according to the Pew Charitable Trusts.) Both Moody’s and S&P put Minnesota in the middle of their top-tier bracket, while Fitch put Minnesota at the top rating as of January 2017.

OK, so now we know where California, Minnesota and Mississippi fall along political, economic and social lines. But what about cool factor? California has surfing. Mississippi has the Blues. Minnesota has … cold? And craft beer.