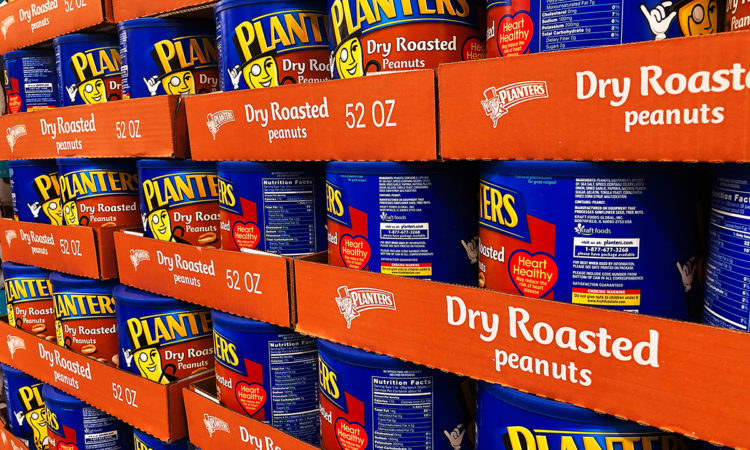 The Minnesota food company on Thursday announced that it has inked a $3.3 billion deal to buy snack nut brand Planters. Hormel CEO Jim Snee says it could pave the way for more acquisitions in the snacking space.
By Dan Niepow
February 11, 2021

On Thursday, the company announced that it has signed an agreement to acquire snack nut brand Planters from Kraft-Heinz Co. for $3.3 billion. The transaction, which is slated to close in the second quarter, will mark the largest purchase in Hormel’s history.

Earlier this month, word of the deal had already leaked to the press.

In a conference call with investors on Thursday morning, Hormel president and CEO Jim Snee noted that the company has had its eye on Planters for years.

“We identified the Planters brand in our 2016 strategic planning process as a brand that would fit well into our growing and evolving portfolio,” said Snee, who also serves as Hormel’s chairman. “However, it wasn’t until early 2020 that we engaged with Kraft-Heinz on this process.”

Over the last decade, Hormel has been working to move beyond its reputation as a “meat-centric” company. In 2013, the company acquired peanut butter brand Skippy for $700 million. That led to the purchase of nut butter company Justin’s three years later.

Snee hinted that the Planters buy could lead to more snack company acquisitions.

“We believe that Planters could act as a similar catalyst into other areas in the snacking space,” Snee said.

The transaction will also bring a significant change to the makeup of Hormel’s revenue: Snee said that 25 percent of the company’s sales will come from non-meat products once the deal goes through.

Snee emphasized that the Planters deal is part of Hormel’s long-term strategy.

“There is nothing revolutionary here,” Snee said of the acquisition. “There is no new strategy of the day. The acquisition of Planters is simply a continuation of our strategic evolution.”

But why is Kraft-Heinz eager to dump the Planters brand? For one, the company has been working on a plan to reduce its number of offerings and focus on specific growth areas. In a separate news release, Kraft-Heinz CEO Miguel Patricio said that selling the brand will enable the company to “sharpen our focus on areas with greater growth prospects and competitive advantage for our powerhouse brands.”

Meanwhile, Kraft-Heinz has been working on a broader cost-cutting initiative. In September 2020, the company pledged to cut costs by as much as $2 billion by 2024.

Snee believes that Hormel can differentiate Planters products by leaning on consumers’ preferences for “grab-and-go” goods. Unlike bulk nuts in a grocery store, Planters products don’t need to be portioned out and weighed, Snee noted.

“The ‘grab-and-go’ element for consumers continues to gain traction,” he said.