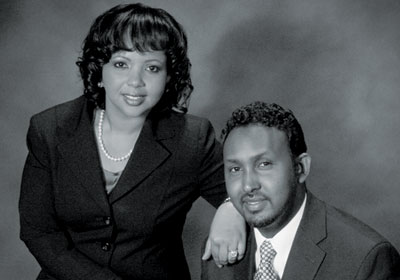 Dr. Siyad Abdullahi, 39, was raised to be an entrepreneur. His family, which is ethnically Somali, had a household products business in Kenya, and by the age of 9, he was immersed in inventory, warehousing, and staffing chores for the company.

He earned a medical degree in Kenya, but never planned on a conventional practice. “My interest was in entrepreneurship and health care,” Abdullahi says. “I was always looking for an intersection between medicine and business, where I could create a large system serving a large volume of patients.”

He immigrated to the United States in 1999, earning a master’s degree in public health at Boston University. He later did postgraduate work in clinical research, nonprofit management, and business management.

In 2002, he moved to the Twin Cities, home to the largest Somali community in the United States, and began working with refugees in community clinics. Alarmed at their inability to communicate their health needs, he started his first business: Midwest Career Institute, a company that trains bilingual and bicultural health care employees to alleviate cultural and linguistic roadblocks to proper treatment.

By then Abdullahi had met his wife-to-be, Khadija Ali, now 32, who had immigrated to the United States with family members at the age of 15. She had her own experience with language barriers: Shortly after arriving in this country, her sister, Ladan, had fallen ill; because of difficulty communicating, her strep throat went untreated and developed into a chronic illness.

In 2005, the couple founded Language Banc, which offers translation and interpreting services in more than 100 languages, helping immigrants communicate more effectively with medical personnel, social workers, and others. Ali now oversees the day-to-day operations of the company, which contracts with 800 translators and interpreters. Soon after, Abdullahi and a cofounder, Iraqi-born Abdulwahab Asamarai, launched Pro-Health Care, Inc., which provides more than 250 culturally appropriate caregivers for homebound elderly and people with mental illness or physical disabilities. More than half of the company’s clients are East African immigrants who speak Arabic or Somali; the rest are African American or white.

“I get called a lot by institutions, health systems, clinics, school districts—any group that’s serving new American populations, particularly East African clients,” Abdullahi says. Much of the speaking and diversity training he does for these groups is pro bono. “I see myself as an ambassador for immigrants in the business community, and it’s important for me to give back.”

The businesses combined produce revenue of $6 million, but Abdullahi is at least as proud of the jobs he’s created. “I love to create opportunities, but it’s not just about a paycheck for me. It’s about all the family members of our employees and our larger family drawing paychecks because of what we’ve done.”

Robert Nyagudi, an International Leadership Institute volunteer, nominated Abdullahi and Ali, noting how they contribute to local and global communities as employers and through Abdullahi’s service on many nonprofit boards.

While pleased with what he’s accomplished so far, Abdullahi says, “My vision is to become a mainstream business leader. Right now, we are an immigrant business. I want my business to become a large Minnesota company that just happens to have been started by an immigrant. I would love to do something that focuses on the new American population, but on a national level.”