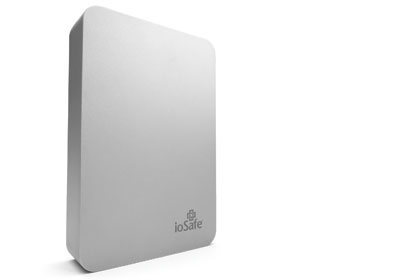 This first-of-its-kind portable storage drive is aimed at tablet owners who want to carry around more media files than their device’s built-in storage will allow. The 500GB GoFlex Satellite wirelessly connects to iPads, iPhones, and Android devices. The hard drive has a built in wi-fi router. It can also connect directly to a Mac or PC via USB cable. The GoFlex Satellite is designed to be used on the go. Rugged mounting inside the box makes it capable of withstanding some jostling. Seagate says it’s meant to be tossed in a backpack, where it can connect wirelessly to a device in your hands. The battery is rated for five hours of continuous streaming. PCMag.com sees potential business uses, such as creating a temporary private network to share files or presentations. PCWorld.com wonders whether the product’s release was rushed, noting some poor design in the app used to access files.

This armored, metal brick withstood a shotgun blast at last January’s consumer electronics trade show in Las Vegas. The ultra-rugged device is designed to protect data under extreme conditions. The company claims that, in addition to shotgun fire, it can withstand being crushed by 5,000 pounds, submerged in water for up to three days, and dropped out of a second-story window. Not enough for you? There’s an option to upgrade to an even stronger, titanium casing. A one-year warranty and data recovery plan covers damages up to $5,000. The device weighs about one pound, and prices range from $150 for 250GB to $400 for 1TB. CNET.com says it could be a good investment for someone who works on a ship, oil rig, construction site, or in a war zone. “For others, it would probably be overkill.”