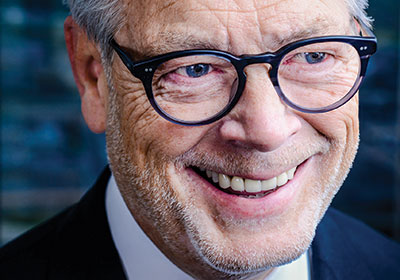 Mark Sheffert was in the midst of a successful business career when he realized that he didn’t want to spend the rest of his life as a corporate executive.

“Patience is not my long suit,” Sheffert says, speaking from his 45th-floor office in the IDS Center in Minneapolis. Though he thrived as an executive with Prudential Insurance, North Central Life Insurance and First Bank System, he felt hamstrung by “a lot of meetings and a lot of bureaucracy.”

So in 1989, at the age of 42, he struck out on his own and formed a firm that helps troubled companies solve their problems. Sheffert’s business, Manchester Cos. Inc., has worked with more than 700 clients, which have hired the firm for services such as financial restructuring, management consulting and investment banking. Sheffert embraced this model because he could weave in and out of businesses while dispensing with the tedious aspects of working for a single company. “Mark has helped to save, and perpetuate, many businesses in the Twin Cities,” says Brian Wenger, an attorney with Briggs and Morgan in Minneapolis, who has worked with Sheffert on several company restructurings. In particular, Wenger recalls Sheffert’s leadership in the cases of boat company Genmar and Chaska-based pickle company M.A. Gedney. Sheffert was the chief restructuring officer for Genmar, helping guide the sale of its brands to a California equity firm and to Genmar founder Irwin Jacobs and a partner. For Gedney, Sheffert developed a reorganization plan that led it out of Chapter 11 bankruptcy in 2003.

“He can identify weaknesses in a business quickly,” Wenger says, adding that Sheffert also “can see opportunities quickly and executes well.”

Righting Minnesota Diversified Industries (MDI), a nonprofit that provides jobs for people with cognitive and physical disabilities, is one of the projects Sheffert is most proud of. Manchester started working with the organization in 2007, when it was losing $1 million a month while projecting annual revenue of $22 million. Sheffert helped MDI close an unprofitable venture, sell a huge warehouse, restructure debt and cut personnel costs. Within two months, MDI was a smaller company, more focused on its core manufacturing business and operating profitability.

“MDI was a particularly special turnaround client because of its unique mission to employ disabled people,” Sheffert says. “These folks rely on MDI to provide employment and the sense of pride, value and independence that comes with a job, and we are proud that we helped MDI find a way to do that with a long-term, sustainable business model.”

Sheffert discovered a knack for rapid strategic analysis and business course corrections when he was in banking. “Every time I got an opportunity along the way at First Bank, I was always turning something around,” he recalls. “They were always pulling me in off the bench to go into a situation that was troubled, whether it was our mortgage company or our stock brokerage business or our capital markets.”

But given his upbringing, he was always likely to strike out on his own. Mark Sheffert is very much of a self-made man. He grew up poor in Lincoln, Nebraska, and started working at 12 to help put food on his family’s table. His father’s work as a bra and girdle salesman didn’t pay well; what’s more, he also struggled with chronic back problems. “They didn’t have disability insurance back then, and my mom did the best she could,” Sheffert says.

“If it wasn’t for my paper route, we wouldn’t have had food at times,” he adds. Being the oldest boy in the household when his father was traveling, Sheffert says he acted as the “man of the house” and learned how to be a problem solver.

Sheffert also puts his life and business lessons to work in other ways—board service, for one. Former U.S. Sen. Dave Durenberger, who has served with Sheffert on several boards, says that he has a bedrock sense of fairness. “He knows how to deliver the bad news in a constructive way” to executives and board members, Durenberger says, who adds that Sheffert’s end goal is always determining what is “the right thing to do.”

Sheffert has another core principle that is central to how he operates, Durenberger notes. “If you’ve got a problem in a company, you fix it now,” he says, because Sheffert believes the magnitude of the problem will merely grow if it is ignored.

Many local leaders also have turned to Sheffert as a counselor. Karen Himle, now an executive vice president with search firm DHR International, says she scheduled a breakfast with Sheffert several years ago at the Interlachen Country Club. “I was trying to make the case that I wanted to come to work for him,” she says.

Instead, she recalls, Sheffert said, “You need to go to the University [of Minnesota], they need your help.” Himle took his advice and became the U of M’s vice president for university relations. “He is known as someone who is the consummate counselor,” Himle says, whether he is dissecting the struggles of a for-profit business or giving career advice. “He has a very unique ability to sniff out problems before they are fully ripe,” she adds. “He is a keen observer of the nuances of human behavior.”

From 2000 through 2005, Manchester Cos. had 65 to 70 employees, with annual revenue in the $5 million to $10 million range. In recent years, Sheffert has dramatically altered his business model. Manchester still has annual revenue of seven figures, but Sheffert says he’s reduced the number of services that his company provides, operating mostly with independent contractors. “We have a bench of people who are specialists in different areas,” he says, including organizational development and bank underwriting.

“I’m trying to avoid the word ‘retirement’ because I don’t know that I will ever retire,” Sheffert says. He now wants to spend more time with his family and focus more of his energy on corporate governance and nonprofit work. He currently serves on the University of Minnesota athletic department’s executive board. He also is a board member for Bolder Options, a Twin Cities nonprofit that mentors disadvantaged youth.

That drive to serve others is key to Sheffert’s philosophy of life, which also applies to business. “The most important asset you have is your reputation,” he says. “And the only way you can protect your reputation is through integrity.”

1961
Moves to the Twin Cities when his father is transferred to Minnesota.

1967
Drops out of the University of Minnesota after the death of his father and because of a severe football injury.

1981
Completes Executive Program at the University of Minnesota.

In a First Bank System publication in 1987 after becoming chairman of First Trust Co.

1988
Earns master’s degree in management from the American College in Pennsylvania.

1999
Awarded Turnaround of the Year from the National Turnaround Management Association for his work with St. Paul-based Medical Graphics.

2008
Awarded Turnaround of the Year from the Upper Midwest Chapter of the Turnaround Management Association for his work with Minnesota Diversified Industries.