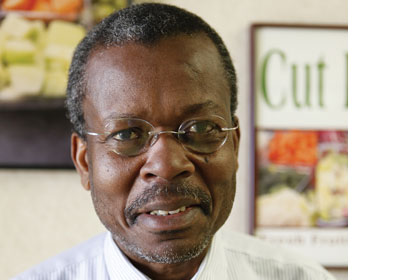 Lawford Baxter recalls spending hours in the fields of his native Jamaica as a child, helping his parents cultivate coffee, cocoa, oranges, and whatever else they grew. “I had no choice,” Baxter says, chuckling. “I was required to help out.”

Baxter took that agricultural experience and moved to the United States in 1980 to study plant and soil sciences at Tuskegee University in Alabama, where he earned his undergrad degree. In 1982, he came to Minneapolis to study horticulture at the University of Minnesota, where earned a master’s degree and a PhD.

Baxter then held research positions at several food-related companies in Delaware, Chicago, and California before moving back to Minnesota in 1997. A year later, he founded Cut Fruit Express, a fresh fruit and vegetable supplier now based in Inver Grove Heights. The company started out with 10 employees; it now has about 60.

“I understood how fresh produce behaves after you peel, cut, slice, or dice it, and how you can manipulate it to increase its shelf life,” Baxter says. “And I realized that at the time, the industry was in its infancy.”

Cut Fruit buys fresh produce from farmers in California, Texas, Mexico, Costa Rica, Chile, and other parts of the world. The company’s scientists—Baxter and one other employee—determine the kind of packaging required to keep different types of cut produce fresh and provide the specifications to a packaging company. Cut Fruit then sells these cut fruits and vegetables to retailers such as Lunds and Byerly’s, as well as to distributors, including H. Brooks and Company, US Foods, and Upper Lakes Foods, that deliver them to restaurants and grocery stores. The company serves customers in Minnesota, Wisconsin, Iowa, North and South Dakota, and Nebraska.

Baxter says that after it was launched, the company took off instantly, growing more than 230 percent in its first three years in terms of sales. He adds that this was because only a handful of similar companies existed at the time.

“A company in California couldn’t compete with us in our market for some items,” Baxter explains. “For example, they can’t cut a strawberry, dip it in chocolate, and send it out here. It will fall apart before it gets here.”

Hyon Kim, owner of Hopkins-based technical consulting firm MN Best, says that Baxter’s company’s success represents only part of his achievements. She says that Baxter has worked hard to improve the lives of his employees, about 85 percent of whom are immigrants themselves. Baxter provides homebuying assistance to his employees and postsecondary education assistance for their children. He also offers about two-and-a-quarter acres of Cut Fruit’s property—plus water and gardening know-how—to his employees for planting and harvesting their own fruits and vegetables. Baxter says it boosts employee morale, helps them eat healthy, and allows immigrant employees to grow produce native to their home countries.

Cut Fruit Express is also a sponsor of Project Sweetie Pie, a North Minneapolis organization that helps young people grow their own fruits and vegetables at community gardens, providing kids with improved nutrition and the opportunity to sell the produce that they grow. In addition to monetary contributions to the organization, Baxter helps the kids prepare the land for cultivation and assists with technical gardening issues. “It is amazing how much he has done for these kids,” Kim says. “He’s like a Buddha.”

Baxter himself is more modest about his contributions. “I have benefited greatly from the community, and I think I almost have a duty to reciprocate,” he says.