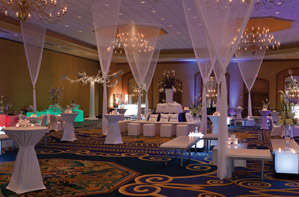 For the 2009 Cystic Fibrosis Convention in Minneapolis, EdgProductions, a Minneapolis-based event design company, created a hospitality room that would provide relaxation and networking in a ballroom at the Hilton Minneapolis. Eurand, a pharmaceutical company based in the Netherlands that makes drugs for patients with cystic fibrosis, wanted to transform a plain banquet room into a chic international networking space that promoted its four major locations: the United States, Italy, France, and the Netherlands.

Nancy Jacobs, president of EdgProductions, says her company provided a complete package for Eurand—building furniture and lighting pieces that both her company and her client could reuse for other events. The hospitality event had a contemporary ultra-lounge feel that was warm and intimate so that conventioneers could drop in, have some refreshments, and leave whenever they pleased. Eurand’s logo and marketing pieces were interwoven throughout the event.

Several other convention events were happening on the same floor, so Jacobs demarcated the entrance to the Eurand event with 10-foot Plexiglas columns featuring the company’s logo and arrangements of bleached Manzanita branches with stands of crystals and votive candles in white urns.

The focal point of the room was a large, square bench, which provided a place for guests to sit and chat. A large floral arrangement by EdgProductions of white hydrangea, dendrobium orchids, and calla lilies in a geometric urn sat on the raised center of the bench. The bench and custom cushions were made by EdgProductions. Screen-printed toss pillows printed with Eurand’s logo—a subtle and comfortable way to brand the event—can be used again. Pianist Michael Erickson played for the guests.

Benches, ottomans, and low cabaret tables were available for small groups to gather around. White leather and chrome benches and Plexiglas cube tables added to the lounge feel. The cubes featured centerpieces with Eurand company information, and end tables had large fluted glass vases with floral arrangements. Tall cocktail tables were cinched with white spandex linens and topped with round vases with cymbidum orchids surrounded by votive candles.

Panels of translucent fabric hung from the ceiling defining each seating area, and four tall white trees emphasized the four corners of the room where four different food and beverage stations were located. “Each bar and beverage station highlighted one of their international facilities,” Jacobs says. “Each bar had the flag of that country and the photos of the facility within that country.” The bar fronts also displayed Eurand’s logo.

EdgProductions also made serpentine Plexiglas buffet tables, which were lit with LED lights in different colors from inside and covered in white spandex. Each buffet had an arrangement of Manzanita branches similar to the entrance. Wines and cheeses from Italy, France, the Netherlands, and the United States were served at each station.

Jacobs says the most challenging aspect of this event wasn’t the custom furniture pieces. It was a last-minute request: distribute 2,200 custom-labeled coffee packets to guests’ hotel rooms while they were at the Eurand reception so that the gift was waiting for them when they got back to their rooms.

T & D Partners arranged for the manufacture of the custom coffee packets with a welcome message from Eurand. “We had to collate everything, bring everything to all the different hotels, have a conversation with the bellmen [at each hotel], and make sure they all got placed strategically in each of the rooms,” Jacobs says.

In the end, the event and room gifts were a hit. “We hit every target goal they wanted,” Jacobs says. “The flow of the evening worked very well.”