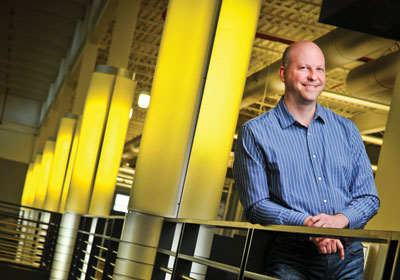 Having started and sold several successful technology companies in the 1980s and early 1990s, Charlie Kratsch spent some time as a stay-at-home father while figuring out his next move. He found inspiration from his stepfather, an elementary school principal, who challenged him by saying, “A lot of people have the opportunity to make money, but many don’t have the opportunity to make a difference,” Kratsch says.

Returning to the workforce in 1993, Kratsch became technology director of the Centennial School District in Circle Pines. There he saw first-hand the difficulties schools faced in managing the hyperabundance of student data. The data include everything from attendance and health records (immunizations, allergies, etc.) to assessments, behavior reports, grades, food service accounts, even students’ dietary history.

There’s also census information, testing data, curriculum and course data, and on and on. Making all this more manageable would help administrators, teachers, parents, and students gain better access to the information and use it for making decisions.

“I wanted to use technology to make schools better,” Kratsch says. “I wanted to make it easier for administrators to do their jobs, promote collaboration [among] educators, parents, and students, and use technology to personalize learning for every kid.” So the serial entrepreneur did it again, founding a new company, Infinite Campus, to build an Internet-based system for centralizing student data. The Internet wasn’t quite ready to handle that task, so Kratsch spent the first four years honing the technology until the Net could take on the job.

In 1997, Centennial adopted Infinite Campus District Edition, and it’s been a customer ever since. Infinite Campus has since become the largest U.S.-owned student-information system company in the country. The Blaine firm now has customers in 43 states that serve 5 million students.

In 2001, the federal government passed the No Child Left Behind law. The legislation required school districts to ramp up their data reporting to the state. To accommodate those requirements, Infinite Campus introduced a new software product that helps states collect and analyze data from all of its districts. Four states and the federal Bureau of Indian Education now use this technology.

Infinite Campus now is focusing on the third leg of Kratsch’s vision: helping teachers personalize education through technology. Part of the new platform will include ways to pair students with the right teacher at the right time to match their learning styles. Teachers also will be able to develop individualized learning plans based on student data.

“One size fits all doesn’t work anymore in education,” Kratsch asserts. “We’re using technology and mobile devices to personalize learning for every kid. Technology is reinforcing [the notion] that the ownership of their educational experience belongs to students. When kids want to do something, it’s difficult to get them not to do it.” Not surprisingly, given his background, Kratsch fosters an entrepreneurial culture at Infinite Campus. Chief Operating Officer Eric Creighton says that the company’s flat organization recognizes and rewards individual contributions, encouraging employees to innovate and keeping turnover low.

“Charlie has the belief that his company can’t fail,” Creighton says. “There was never a fear or doubt in his mind that the company will continue to grow and move forward. That makes him successful, and so does surrounding himself with people who help him make sure we don’t overlook things or get in too deep.”