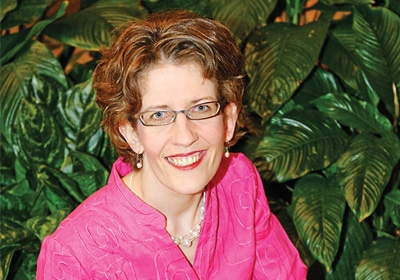 I had spent seven years at a Minneapolis-based nonprofit as COO. After serving as interim president for five months while my boss was on sabbatical, she decided not to come back, so I stayed in that position an additional five months. I applied to be the company’s new president, knowing that the organization could no longer afford both a COO and president. I found out on a Friday in February 2009 that the board had opted for an outsider.

With a knot in my stomach and a lump in my throat, I had to walk into the office on Monday and tell the staff that I had been passed over. They all knew it meant I’d be laid off, although I stayed on for another 10 months to help with the transition.

My job situation was especially stressful because a few weeks earlier, my husband had quit his job and become a stay-at-home dad with our brand-new second child. To help me process the tremendous disappointment and fear I was going through, I decided to turn my focus outward. I started a blog to share the money-saving tips my husband and I had learned over the last few years while climbing out of $50,000 worth of debt.

Much to my surprise, 10 days after launching my blog, [television station] Fox 9 did a story on it. That kicked off a media frenzy, resulting in over a hundred media appearances over the next eight months that grew my blog exponentially. Who would have thought that 10 months after starting it, my blog would be supporting my family through advertising and affiliate marketing income?

What started as a tremendous blow to my ego, an unsettling time for my family, and the largest professional disappointment I had ever experienced became the fork in the road that ultimately launched me into a new, much more fulfilling career.