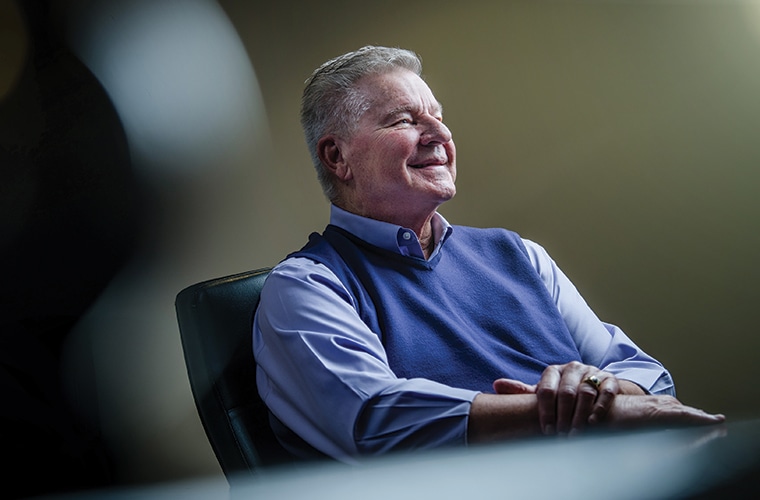 He saw opportunity in the food supply chain business, and delivered.
By webpublisherpro
| April 01, 2020
Profile Video

In the classic story of an upstart entrepreneur believing he could run his own business better, Bob Hageman gave himself an even bigger challenge. He launched with no business plan, no savings, a $15,000 loan from a friend, and the added pressure of providing for a young family.

“Two young kids, I needed a job, I didn’t like what I was doing, and I had no money. It’s just a recipe for success,” Hageman says with a laugh.

But he succeeded. Hageman took what he had learned while working for others in the meat business, and with sales savvy and perfect timing in the changing food supply chain industry, he built J&B Group into a food powerhouse. The $750 million St. Michael–based company operates a diversified set of businesses that cater to the retail and food service industries. Perhaps best known for its No Name Steaks, J&B specializes in protein and offers production, distribution, wholesaling, and logistics.

Hageman—who wryly calls himself a “meat head”—grew J&B by focusing on business basics that his former employers and many competitors overlooked: superb service and respect for customers and employees. He imbued the company with the “J&B Way” (now called J&B Cares), core values that include developing superior products and service, customer satisfaction, and teamwork.

J&B first gained a foothold by offering more flexible distribution to small meat markets and retailers. Previously, they had to adjust to warehouses’ rigid delivery schedules and a “you’ll take what we have” approach. J&B started delivering everything the meat customers wanted when they wanted it, fulfilling every promise. Co-founder Joe Dehmer’s St. Michael butcher shop served as a warehouse until they got J&B on firm footing.

“We served the needs of these people better than what they were getting at that time,” Hageman says. “Then when we started being a force, we could buy product at more competitive prices, and that was also part of our growth.” Another growth engine came from Hageman’s former co-workers. Attracted by his emphasis on treating customers and employees right, they brought established delivery routes and clients when they joined J&B.

After the first year of $450,000 in sales with a $4,000 loss, J&B started growing rapidly and profitably, thanks to customer referrals; Hageman and his team of 16 hit $17.4 million in sales in just five years. Seeking to fuel even more growth with a new menu of products, J&B added a cow boning/ground beef operation in 1986.

CEO Mike Hageman, Bob’s son, discovered J&B’s next opportunity. While working in sales, he noticed that a South St. Paul customer kept ordering truckloads of meat by phone. Curious, Hageman paid him a visit. He was amazed that the tiny butcher shop was selling steaks like hotcakes under the brand No Name.

It was the perfect marriage. J&B wanted to step up its ground beef business and No Name needed capital investments to meet increasing demand. They sealed the deal in 1993. Not only did J&B gain a slate of new products, “it made our customers look at us much differently. It was an extraordinarily innovative idea to put a portion-cut frozen steak into retail. And oh, by the way, it had a brand name,” says Mike Hageman. “That was really ahead of its time.”

J&B took other lessons from No Name, including the idea of selling value-added products like marinated meats. The company also built on the No Name brand by expanding production in St. Michael to include other proteins like chicken and fish.

The No Name acquisition did cause some growing pains, though. J&B had a tough time when it tried to expand No Name distribution to the West Coast, where the cost of customer acquisition was four times higher than expected. “That almost took us down,” notes Bob, adding that 1998 was the only other year J&B lost money.

After ending that brand expansion effort, J&B focused on ramping up growth through acquisition. Between 2004 and 2013, it acquired five companies—most with $50 million to $60 million in revenue—that expanded territory, product lines, capabilities, or market share. These acquisitions were key to helping the company stay healthy, J&B President Chuck Weum says.

“It was either grow or go away. The world is getting smaller and customers are getting bigger, and we need to get bigger with them,” Weum says.

But the company didn’t just pick any food businesses. Hageman made it nonnegotiable that potential partners also aligned with J&B’s values. “They have to have integrity and quality and service and treat people as their number-one asset,” he says.

Over time, Hageman grew J&B’s physical plant and started cross-selling services to customers. It vastly added to its freezer space, allowing the company to expand its cold-storage services and handle large customers like Cargill. With 60 trucks and 90 trailers, J&B also grew its distribution footprint to seven states and added logistics services. Its wholesale wing supplies customers in 44 states, taking advantage of J&B’s cold-storage and transportation capabilities.

J&B also stays entrepreneurial. Three years ago, the executive team decided the time was right for the company to go global. The company already logs $25 million in sales to Mexico, the Caribbean, and Central America, and Mike Hageman sees rapid international growth continuing.

Such comprehensive diversification has helped J&B maintain its growth trajectory and withstand market pressures. There are many, including the expansion of competitors like Costco and Whole Foods at the expense of independent retailers, increasing 24/7 demands from customers; declining beef consumption is another challenge, Mike Hageman says.

But J&B knows how to roll with changing times. Its success evolving and diversifying while staying closely aligned with Hageman’s values has been essential to the company’s success, says Dave Anderson, senior vice president of Frauenshuh, J&B’s commercial real estate advisor.

“Bob has grown the business built on values, hard work, [and] the growth of their people.”
—Dave Anderson of Frauenshuh Commercial Real Estate

“Bob has grown the business built on values, hard work, [and] the growth of their people. We have observed the longevity and commitment and work ethic of their executive team, managers, and front-line people. That’s all due to the culture Bob created and the person he is,” Anderson says. “He just brings that humble leadership and reflects the Minnesota entrepreneurial spirit.”

Looking back on 40 years in business—and success he never imagined—Hageman is thrilled to have operated J&B with integrity and respect, while creating a staff culture of continuous learning and advancing from within.

“We have 121 associates who have been here over 20 years and a bunch over 30 years,” Hageman says. “People invite their kids or brothers and sisters to work here. That’s what I’m proudest of.” 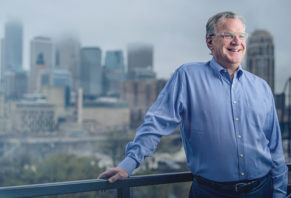 From shopping centers to student housing and market-rate apartments, this developer has always had a knack for reading the markets.
Profile Video
Read More 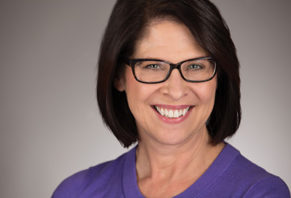 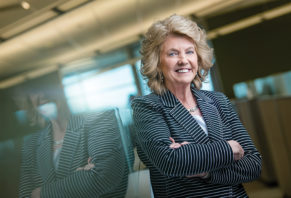