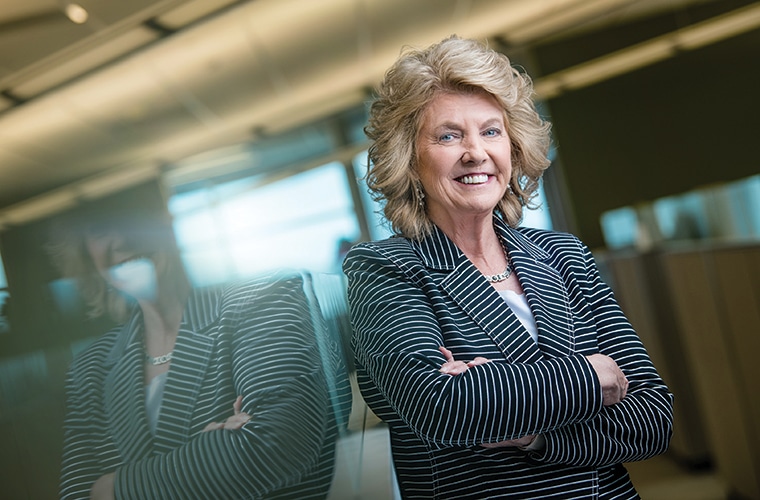 A leader with heart, she’s grown Great Clips by listening to customers and inspiring franchisees.
By webpublisherpro
| April 01, 2020
Profile Video

The treadmill in Rhoda Olsen’s corner office at Great Clips headquarters, overlooking I-494 in Bloomington, is symbolic of her approach to work and life: She never stops moving. She walks through conference calls. She walks while crunching numbers. Her children remember her walking on the treadmill at home in the middle of the night when they were young. If she’s on the move in her minivan (the kids are long since grown, but she still drives one), she’s likely on the phone or recording memos. Olsen dictated Great Clips’ original 416-page operations manual while driving her sons to hockey tournaments. That was 1983. She taped notes to the dashboard.

“I always saw myself as hard-working,” says Olsen, who got her first job as a car hop at Reed’s Drive-In in Excelsior when she was 13 and never stopped working. “At some point it seemed to me that I was able to garner energy and strength around people.”

But she never saw herself running a billion-dollar company—or any company at all. “When I graduated from high school in the ’70s, women only did social work, nursing, or teaching. My math scores were off the charts, but I still got led into social work and psychology.” Her older brother, Ray Barton, who joined Great Clips in 1983 and championed the idea of franchising the moderately priced salon chain, believed in Olsen. He didn’t just open the door, he nudged her through it. Barton first reached out for help in 1983, when Olsen was writing training programs for Land O’Lakes. “We didn’t have anybody in our organization who could do any of that,” Barton says. “She really built the organization. We had great ideas, but we didn’t have any structure. That’s what she brought to the table.”

Olsen continued to advise and provide training support from the outside for five years, until Barton persuaded her to join Great Clips full time as vice president of human resources and training. He encouraged her to buy a share of the business, which was then a regional chain of 180 salons. “She was so valuable to us, I wanted her to have equity and feel like this is her business,” Barton says. Olsen and her husband, Greg, had to take out a 10-year loan to do it. “We had three little boys and couldn’t even afford hockey at the time,” she says. The year they paid off that loan, Great Clips surpassed 1,000 salons.

The key to growing a service business, Olsen says, is nurturing relationships with franchisees. “We believe the way we treat franchisees affects the way they treat customers. You have to be engaged. You have to care.”

Colleagues are quick to confirm that. “When my child was sick, the first person at the hospital was Rhoda, asking how she could help,” says Brian Gustafson, a local investment banker who started his career working for Olsen at Great Clips and is now on the company board of directors. “She is sincere and genuine in her love of the business. She cares about the stylists, the franchisees;  she wants people to have success.”

Even though Olsen stepped down last year as CEO, she continues to be actively involved in daily operations and speak at Great Clips’ annual franchisee meetings, which are more like pep rallies. Employees and franchise owners treat her like a rock star.

“She’s become this mythical creature. [Franchise owners] take selfies with her and get so excited to see her.”
—Ryan Olsen, Great Clips franchise owner, says of his mom, Rhoda Olsen

“She’s become this mythical creature. They take selfies with her and get so excited to see her,” says Olsen’s oldest son Ryan, who gets to see his mom in action now that he and his wife are Great Clips franchise owners. “We wanted to be part of the legacy my mom and uncle have created. Ray is a driver. My mom is a people person. She just believes so strongly in the company.”

But for an executive who is perceived to lead with heart, Olsen describes herself as driven by data. She instituted systems to measure every aspect of the customer experience: wait times, return visits, downtime between haircuts. “If you want to protect the emotional core of how people treat one another,” Olsen says, “give them data.”

The toughest time in her tenure was 2004. Right as the business started to slip due to more competitors entering the market, Olsen was diagnosed with uterine cancer and had to take five months off. “It was time for Ray and I to think about a succession plan—we hadn’t done that.”

But she returned in 2005 with renewed energy and determination. Olsen’s first order of business was to simplify Great Clips’ brand strategy with measures like consistency, simplicity, research, and recognition. “It gave the organization a focal point. Before this, we’d go into a market or a meeting and be all over the board. We restructured and focused.” It worked. Great Clips hasn’t had a declining sales quarter since 2006.

While haircuts are thought of as recession-proof and Amazon-proof, Olsen pushed the organization to embrace technology. In 2011, Great Clips introduced a check-in app that allows customers to see wait times at nearby salon locations. She added “Clip Notes,” which makes it possible for customers to review stylists. Today, 40 percent of Great Clips customers check in online. The app has been downloaded 10 million times. “Wait times and quality of haircuts are the biggest issues.” Olsen says. “Technology can help with both of those.”

That rough patch more than a decade ago continues to inform the way Olsen leads. “People need to think about what would happen if we were down again.” In 2016, the company went through another major refresh, she says. “We went at it like we were declining.”

Her title today is vice chair of the board of directors. She works closely with Great Clips CEO Steve Hockett and president Rob Goggins. Olsen says she’s trying to do more listening than talking.

She takes time to travel to South Africa, where she volunteers with the Phakamani Foundation, a non-profit that provides micro-loans and training to help women succeed in business. She’s a devoted grandmother, and never misses a family event.

But she’s still on stage for those company meetings, and in the office every day but Wednesday.

What does she do with her Wednesdays off?