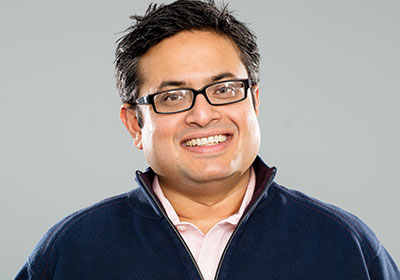 More than a decade ago, Abir Sen was diagnosed with a rare bacterial infection. After a year and a half of illness and numerous medical appointments, he says he felt more empathy for people who are frequently in and out of the health care system. The experience spurred his interest enough to found four high-flying health care startups, some of which have sold for hundreds of millions of dollars and have attracted well-heeled investors.

Fun Fact: After moving to the United States from India, he paid his way through Lawrence University delivering pizzas.

His newest venture, Gravie, has raised $2.6 million in capital since its inception in August. Operating out of the Lumber Exchange in downtown Minneapolis, Gravie is a consumer market for health care services, helping individuals and businesses comparison-shop for health care in the private market and on MNsure. The company, which has signed 49 employers and expects to be in all 50 states by the end of the year, can also make payments on their clients’ behalf.

Sen, 39, says he chose a path that not only offers him a sense of purpose, but also allows him the freedom to be his own boss.

“The job I want is the one I have to give to myself because nobody else will give it to me,” he says. “I have no interest in climbing the corporate ladder—it’s just boring and it’s not cut out for me. “

Originally from Mumbai, India, Sen came to the United States when he was 18 to attend Lawrence University in Appleton, Wis., and delivered pizza at Papa John’s to pay his way. (He hasn’t eaten Papa John’s since, he adds.) Equipped with a bachelor’s degree in economics and philosophy, he landed at Deloitte Consulting in 1997, where he advised large managed care organizations. Roughly a year later, Sen, then 23, and six others launched Definity Health—the country’s first health reimbursement plan and the predecessor to health savings accounts.

Definity’s CEO, venture capitalist Tony Miller, led efforts, talking to more than 30 investors and, after a year and a half, raised the money. Although Sen wouldn’t disclose how much ownership stake he or the other Definity founders had, Definity collected $84 million in private equity and venture capital from 2000 to 2004, according to the National Venture Capital Association. The company sold for just more than $300 million in 2004 to UnitedHealth Group.

Meanwhile, Sen went to study at Harvard Business School, where he earned an MBA. With that advanced degree and start-up experience, he was ready to tackle his next start-up.

With Kyle Rolfing, a cofounder at Definity, Sen started wellness IT company RedBrick Health in 2006. The company provides consumer-friendly financial tools, incentives, personal wellness plans and independent customer service advocacy. They recruited Jill Prevost from Life Time Fitness, where she was a marketing manager, to lead innovation and consumer engagement. RedBrick secured $15 million in funding from one of Sen’s Harvard professors, Bob Higgins, who was then at Highland Capital, and from Versant Ventures.

Its last round of funding was in April 2013 for $15 million, according to SEC filings, taking its current venture capital coffers to nearly $75 million. Sen says he still has an ownership stake in the company but would not disclose the value.

Even with a successful startup underway, he says he saw a window of opportunity when plans for the Affordable Care Act began to become public.

Taking with him Prevost and another RedBrick staffer, Marek Ciolko, they launched Bloom Health in 2009. Since employers and employees were being introduced to more health care plans, Bloom advised companies and employees on how to manage insurance dollars.

Before Bloom was snatched up in 2011 by three insurers—Indianapolis-based WellPoint, Blue Cross Blue Shield of Michigan, and Health Care Services Corp.—it raised $12.5 million in venture capital and private equity. “Once you do this a few times, it’s easier to raise capital,” Sen says.

Sen says he sold Bloom for “many multiples” of the $12.5 million.

It’s no surprise that when Sen launched Gravie, investors came knocking. A consumer marketplace for health care insurance, Gravie raised $2.6 million in a venture capital round led by New York-based FirstMark Capital. The same firm has backed other high-flying startups such as Pinterest and StubHub.

Outside of health care, Sen’s passion is speed. He says he spends “a lot of money” on cars, including a Ferrari, Range Rover, Jeep and BMW. He lives with his wife and border collie, Mona, in a house off of Lake Calhoun.

When Sen set out to help people, he was perhaps helping himself just as much.

“I think all of my jobs have been my dream job. I wouldn’t be doing it otherwise. I’m not doing it for the money.”