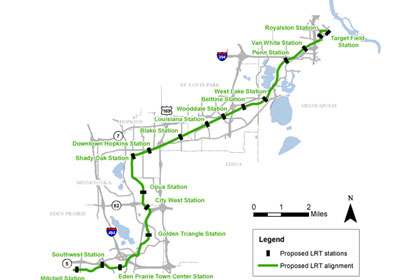 As part of the county’s approval, the board also agreed to officially commit to its share of the funding for the project: $165.3 million.
August 30, 2014

The Southwest Light Rail project moved one step closer to final approval Tuesday, when the Hennepin County Board voted 6-1 to officially gave their consent to the portion of the project located in Minneapolis.

This leaves the Minneapolis as the only community along the route that has not yet voted to approve the project. The Minneapolis City Council is scheduled to vote on the project on August 29.

As part of their approval, the Hennepin Count Board also agreed to public ownership of the freight tracks in the Kenilworth Corridor, which was part of an agreement worked out between the City of Minneapolis and the Metropolitan Council earlier this summer. The public ownership will limit the number of railroads that will have access to the tracks, but it does not limit the number of trains on those tracks in a given day  — or what materials those trains will be transporting.

“We can’t keep shippers on the line from shipping more,” said Howard Orenstein, of the Hennepin County Attorney’s Office, prior to the vote. “W can’t control what is shipped or the volume of what is shipped.”

“It’s very difficult to restrict freight rail rights; freight rail shippers have a lot of rights under federal law,” Orenstein said. “Although we own the property, they have a right to be there.”

Currently, only the Twin Cities and Western Railroad and Canadian Pacific Railroad have access to the tracks in the Kenilworth Corridor, part of an agreement reached 17 years ago that, at the time, was called a “temporary” reroute of the freights lines.

Earlier plans for SWLRT called for the freight lines to be re-located to St. Louis Park, but that plan was opposed by both residents and the railroads, which called the option unsafe. Further efforts to find a route acceptable to the railroads failed. Minneapolis was opposed to locating both freight and light rail in the Kenilworth Corridor, even as that became the only viable option to move forward with the project.

As part of the county’s approval, the board also agreed to officially commit to its share of the funding for the project, $165.3 million, which would be part of the application submitted to the Federal Transportation Authority by the Metropolitan Council.

“This doesn’t send any money, this doesn’t send a check,” said Commissioner Peter McLaughlin. “But it does commit us in way that is recognized by the federal government as fulfilling the budgetary needs for 10 percent of the capital cost of the project.”

The total cost of the project is estimated at $1.66 billion. Hennepin County and the state of Minnesota are each expected to pick up $165.3 million, with another $495 million from a coalition of five metro-area counties called the Counties Transit Improvement Board. That Board represents a taxing district that collects a sales tax of .025 percent in Hennepin, Ramsey, Anoka, Washington and Dakota counties.

Four communities along the nearly 16-mile route from Eden Prairie to downtown Minneapolis have already granted the municipal consent for the project, as required by state law: Eden Prairie, Minnetonka, Hopkins and St. Louis Park. Hennepin County has also consented to the route, and has now added its approval for the route through Minneapolis.

“I am not supportative of this, which doesn’t surprise anyone,” said Hennepin County Commissioner Jeff Johnson, who cast the only vote against the project and who is the Republican candidate for governor against Mark Dayton. “I have been asking for years for a cost-benefit analysis for this as to how it will relieve congestion in comparison to its cost. I’ve never seen that, because it’s not going to relieve congestion.”

The other possible player in the project could be the Lakes and Parks Alliance, a group of mostly Minneapolis residents concerned about the environmental impact of light rail lines and freight both moving through the narrow Kenilworth Corridor between Lake of the Isles and Cedar Lake.

Tom Johnson, an attorney for the Lakes and Parks Alliance, said his members will decide their next step following the August 29 vote by the Minneapolis City Council. “There is a whole host of (possible) lawsuits,” said Johnson when asked about the group’s options.