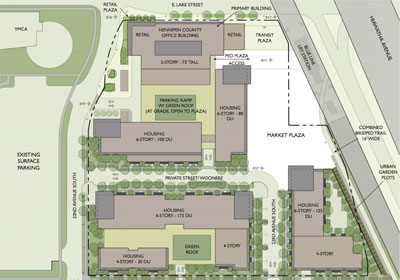 The parcel to be developed is among the largest transit-oriented development sites in the city.
November 10, 2014

Hennepin County is moving forward with plans for a high-profile development site along Metro Transit’s Blue Line in Minneapolis.

The Midtown Farmers Market, which has used the site for years, also will have its own space.

The Minneapolis School Board currently owns the site, where it operates the district’s Adult Education Center. Finance & Commerce reports that it will sell the property for a market rate of $8 million.

Part of the impetus for Hennepin County developing the parcel is its goal of shifting social services delivery from a highly concentrated hub in downtown Minneapolis to more accessible locations spread throughout the county.

Officials told Finance & Commerce that they hope to close on acquisition of the property by March and begin construction of the social services hub by the middle of 2015, with construction taking at least a year. Development of the entire parcel—including the housing portion—would come in phases.

During a neighborhood association meeting in August in Corcoran, where the development is taking place, residents expressed concern that the project was falling short of promised retail and office space that would help enliven the area. The association also wanted assurances that further stages of development would actually occur.